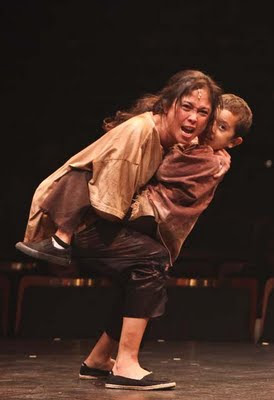 Sacramento’s Music Circus closes its 61st season with a Music Circus debut of “Miss Saigon,” the modern version of “Madam Butterfly” by Claude-Michel Schonberg, Richard Maltby Jr. and Alain Boublil, the guys who gave us “Les Miserable.” It is a show that is big and loud and bawdy, but it’s also small and tender and always emotionally raw.

The writers set their story between 1975 during the chaos leading up to the fall of Saigon and 1978 when we see the aftermath of America’s time in Vietnam.

Director Stafford Arima has a stellar cast headed by Ma-Anne Dionisio as Kim, an naive 17 year old country girl who has lost her family and her home and is forced to work as a bar girl in a sleazy club in Saigon, where the owner, “The Engineer” (Kevin Gray) sells his girls’ services to the soldiers. The opening number, “The Heat is on in Saigon” should earn the show an R, or at least a strong PG rating.

Kim is saved from becoming simply a girl someone would hire for an hour when she meets Chris (Eric Kunze), an American soldier who is bored with the club scene. His friend John (Josh Tower) buys the innocent girl for Chris and in the morning, he invites her to live with him.

The bar girls hold a mock wedding for the couple and Chris promises to take her with him when he returns to America.

Three years later, Kim is still in Vietnam with the son Chris does not know he has and Chris is married to Ellen (Misty Cotton). In flashback we see the chaotic scene at the American embassy as they are evacuating Saigon and Kim is unable to reach Chris.

John, now working for an agency trying to connect children of American soldiers with their fathers, finds Kim and learns her secret. He lets Chris know that he has a son. Chris and Ellen fly to Vietnam to find the boy, Kim learns of Chris’ marriage and makes the ultimate sacrifice so her son can have a better life in the United States.

The story is a simple, familiar one, but when given the big musical treatment with lots of glitz and special effects, it becomes something far more and it hits a high note in many numbers.

“Miss Saigon” is perhaps most known for the appearance of a helicopter on stage. I wondered how Music Circus was going to handle that effect, and it was done brilliantly with the use of lights, strobe and sound effects. It added incredibly to the emotional high of the fall of Saigon scene.

There isn’t a weak performance in this hard-hitting musical. Dionisio has played the role of Kim several times before (she originated in the Canadian premiere of the musical in Toronto plus the Australian premiere production and the London Production) and she is a wonder. Her most emotional scenes were gut wrenching and her love for son Tam fairly bleeds onto the stage when she sings “I’d Give My Life for You.”

Kevin Gray as The Engineer is an outstandingly sleazy manipulator who hits his high in “The American Dream,” as he tries to find a way to get into America.

Tower’s John is the rock that centers the piece and his “Bui Doi” at the start of Act 2 was so beautifully chilling. It was by far my favorite number.

Kunze, who has also played the role of Chris before gives a powerful performance and we feel his emotions as he is torn between the woman he loves and the girl he loved.

Misty Cotton has a brief, but memorable role as Chris’ wife, who suddenly learns about the girl he left behind and the child the two of them created. Her “Now that I’ve seen Her” was very poignant.

This is not a show that will leave you remembering any of the songs, but memory of the emotions felt throughout will last for a long time.