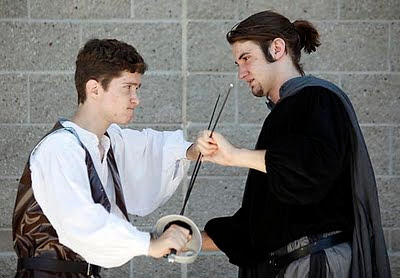 I am so glad that Acme Theatre’s summer show is in the Veterans’ Memorial Theater … no need to endure the heat of a Davis evening!

This year’s summer show is actually two one-act plays. “Shane of Third Street” was specially written for Acme by alum Brian Daniel Ogelsby (Acme ’02) and directed by Ryan Lagerstrom (Acme ’09) who, we are told, “took a break from directing films and took on the challenge of telling a story live.”

The lines of fantasy and reality blur in this story of Shane, a misfit living on Third Street in a run-down section of town. Alex Clubb gives a powerful performance as a young man whom we first meet preparing for a swordfight with Lord Pain (Nick Mead). No program credit is given for the choreography of the swordfights in the play, but they were staged beautifully.

We learn that Lord Pain is a figment of Shane’s imagination as he prepares for the Bakersfield Renaissance Fair. Other characters come in and out of Shane’s present and become part of his fantasy. Particularly good are Roxanne McNally as the Queen and Callie Miller, as Shane’s sister, Marie.

Mead, who is a menacing Lord Pain, becomes part of Shane’s real life and gives the young man the opportunity to make the sort of choices that a true knight would be expected to make.

Emmett Barnes makes a brief, but memorable appearance as the young dinosaur and the tech crew gets high marks for special effects.

After some delicious local strawberries with whipped cream, we were ready for the second play, “The Secret in the Wings,” written by Mary Zimmerman and directed by artistic director Emily Henderson and Maddy Ryen (Acme ’05). It is described as “seven dark fairy tales interwoven in a kaleidoscope of fractured story telling.” Fractured is putting it mildly.

The story opens with mother (Hannah Nielsesn) and Father (Will Kingscott), who must be the absolute worst parents in the world, going off for the night and leaving daughter Heidi (Gigi Gilbert-Igelsrud) in the care of the creepy Mr. Fitzpatrick (Antonio de Loera-Brust), of whom Heidi is deathly afraid (“He’s an ogre!”) and who clomps about the stage like Bella Lugosi, with a very long, very thick tail.

Mr. Fitzpatrick immediately asks Heidi to marry him, as he does before each of the fairy tales he begins to read to her.

Zimmerman’s fairy tales make the original Grimm stories positively Pollyanna-ish. In one, the eyes of three princesses are removed and they are banished to the desert, where two of them turn to cannibalism.

In another, a princess who hasn’t laughed in years agrees to let the men of the kingdom try to get her to crack a smile, but only on the condition that if she does not smile, the unsuccessful men will be beheaded.

In a third, a princess is resurrected by her loving husband, but rather than rewarding him for bringing her back to life, she takes to the arms of another man.

And so it goes.

Each fairy tale is told until it reaches its most climatic moment and then it ends abruptly without the conclusion being read and the next story starts. At the end of the seventh story, the tales begin to be completed, in backward order, until all conclusions have been reached.

The cast for this play numbers about 30 and many actors play several roles. Many are worthy of special mention, especially Clubb (back from “Shane of Third Street”) as the father of “The Princess Who Wouldn’t Laugh”; (Kashmir Kravitz also gets special mention for doing a good job in the title role). Deanna Gee performs the silent part of “Silent for Seven Years” stoically.

De Loera-Brust is suitably scary as the Ogre, Mr. Fitzpatrick, and Gilbert-Igelsrud handles the role of Heidi, who bridges several of the stories, quite well.

Directors Henderson and Ryen keep things moving and visually interesting. Of particular note is “Silent for Seven Years, or The Seven Swans,” which includes a beautifully choreographed group of swans.

This delightful pairing of plays gives a solid evening of entertainment (and don’t forget to try the strawberries at intermission!)