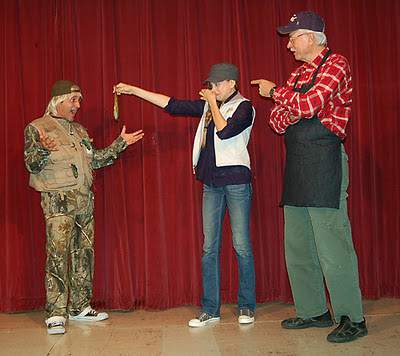 In the 1980s, I saw a musical produced by Buddy Ebsen (of “The Beverly Hillbillies”) called “A Turn to the Right.” It was a show about making peach preserves and, to this day, remains the worst show I have ever seen.

When I saw that the Winters Theatre Company was presenting a show called “Fruitcakes” as its holiday gift to the community, I had great misgivings. If a show about peach preserves, which many people love, could be so awful, could a show about fruitcakes, which most people don’t like, be any better?

I was very happy to see that my misgivings were unfounded. “Fruitcakes” by Julian Wiles, directed by Anita Ahuja, is a delightful little gem of a comedy. It’s also a great community theater play, since it has a cast of thousands (well, about 30), which includes lots of children, all of whom looked like they were having the time of their lives.

The story is set in the tiny town of McCord’s Ferry in Georgia and centers around Mack Morgan (Tom Rost), the guy who owns the whirligig barn. Rost, a veteran of many Winters productions, is as solid as they come and perfect as the man around whom all of the action in McCord’s Ferry seems to revolve.

Into Mack’s life comes Jamie (Alexandra Bazzoni-Curro), a 13-year-old runaway who has stolen a fruitcake from the elderly sisters in town and hides out in Mack’s barn. Bazzoni-Curro is a talented actress who nicely complements any scene in which she appears.

Miss Sarah (Liz Siracusa) and Miss Alice (Ann Rost) are a combination of the Baldwin sisters of “Walton’s Mountain” and the sisters in “Whatever Happened to Baby Jane.” They are constantly feuding and wouldn’t speak to each other at all if they didn’t have to get together each year to make fruitcakes for everyone in town.

When their mother died, she left half of the recipe for her famous fruitcake with one sister and half with the other and they have to work together, each on her own side of their divided house. (Each sister has her own front door, and the kitchen is divided in half by different colored paint for each side.)

The two actresses are fun to watch. Siracusa is grumpy and angry with everybody. Rost — who, with her husband, is also a veteran of many Winters shows — always adds a calm presence to her characters, though I really wish she could project just a bit more. Some of her lines were difficult to catch.

While investigation is under way into the fruitcake caper, the town is getting ready for Christmas. Beebo Dantzler (Jim Hewlett), the town cop, is decorating his house and getting ready for the “Grand Illumination” ceremony, when he will light the lights for the first time. This year he has added Buster, the Christmas hog, a wooden figure that he rescued from a business that was closing.

Hewlett demonstrates an amazing voice as he leads the children in song. I would love to see him do a musical some day.

In the meantime, Beebo’s wife, Betty Jane (Allie Griffey) is the director of the town Christmas pageant and trying to work around a plague of chicken pox that is starting to infect the children. I first noticed Griffey in a small role in last year’s “It’s a Wonderful Life” and commented that she was outstanding in the role. It is nice to see her in a leading role, and she shows that she really knows her stuff (though I do wish that she had a better-fitting bucket hat).

Add to the mix a bunch of other town eccentrics, including Mattie Sue (Dona Akers), a six-time widowed woman with a heart as big as all outdoors, who takes care of most of the townsfolk when they are in need; Skeeter (John Siracusa), a Harvard graduate with a degree in engineering who spends his time fishing, using nothing but poetry for bait (the theory being that the more he bores the fish, the more they will relax and the easier they will be to catch); and a group of hunters who pray to Clyde the hunting angel.

The children are each adorable in his or her own way: EllaRose Eldon, Nicholas McKenna, Pietra Curro, Kennedy Rivera, Sophia Tolley, Corinne McKenna, Victoria White, Angel Tunstall, Sam Petersen, Victoria Olton, Angelica Schiesari and little 5-year-old Mikenzie Lillian, appearing on stage for the first time, who is adorable as she giggles and waves to her family in the audience.

When “chickenpox descends on Bethlehem,” director Betty Jane comes up with a unique solution, while secrets are revealed that affect the feuding sisters, and runaway Jamie changes Mack’s life. It all ends with a violin solo by angel violinist Emilia Orosco.

This is such a fun way to start the holiday season, even if the plates of fruitcake on the audience tables on opening night went untouched!