Rosencrantz and Guildenstern are Dead 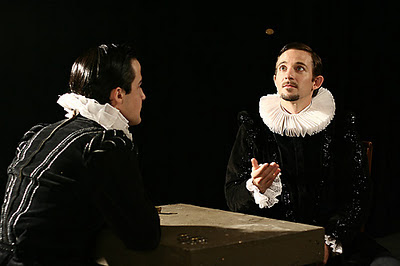 The UC Davis department of theater and dance, and Michael Barakiva, director, have rectified a mistake that was made back in 1966, when someone rejected a new play by an aspiring playwright named Tom Stoppard.

He submitted a play called “Rosencrantz and Guildenstern Are Dead” to the university’s “New Plays Project,” but the committee decided it was only “mildly interested” in the work and rejected it.

Instead, the play went to the Edinburgh Fringe Festival and then on to take London by storm, and UC Davis lost the opportunity to present the world premiere of a play that today is acclaimed as a modern dramatic absurdist masterpiece.

But “Rosencrantz and Guildenstern Are Dead” is finally making its UCD premiere on the university’s main stage.

Stoppard’s play is “Hamlet” inside out, with the minor Shakespearean characters taking center stage and Hamlet and his weird family becoming bit players, who wander briefly through the scenes.

While it seems as if Rosencrantz (Mitchell Vanlandingham) and Guildenstern (Will Klundt) may be backstage watching the play from the wings, in truth we aren’t really sure where they are … but then they aren’t sure where they are or what they’re doing there either.

In fact, the pair spend most of the show trying to figure out where they are and what is going on, in a world that doesn’t make much sense to them.

The play raises questions about who controls our lives: Do we really exercise free will, or is everything preordained and are we only filling out a script that was written for us, but that we haven’t been able to read yet?

Vanlandingham and Klundt are beautifully matched, so similar to each other visually that it’s difficult to remember which is which. Sometimes it seems that even the two of them aren’t quite sure. But they have a warm, friendly relationship, which at one point caused an inadvertent audience reaction, followed by a self-conscious ripple of laughter that rolled through the house.

The scene shifts to Elsinore Castle, where the pair encounter a group called The Tragedians, led by The Player (an outstanding performance by Bobby August Jr.), who explains that they specialize in sexual performances, which they proceed to demonstrate in graphic, but very funny, detail.

The ever-present specter of death is personified in the number of ways to die, which the Tragedians demonstrate, and which our two principal characters don’t seem to realize is a warning about their ultimate end.

Director Barakiva, scenic designer Kourtney Lampedechio and costume designer Maggie Chan worked well on creating the black, white and gray limbo in which Rosencrantz and Guidenstern exist. This becomes a vibrant display of color at the end of the play, which is also the end of the real play itself.

Sound designer Dan Cato Wilson deserves special mention especially for his sea sounds in Act 3, when the characters find themselves at sea, under attack by pirates.

While this show can be enjoyed on its own merits, if you feel your Hamlet is a little rusty, it wouldn’t hurt to brush up your Shakespeare before coming to the theater so you can more fully enjoy all the bon mots and wordplay.

This is one play that is not so much about the conclusion but what happens along the way.
Posted by Bev Sykes at 9:36 AM