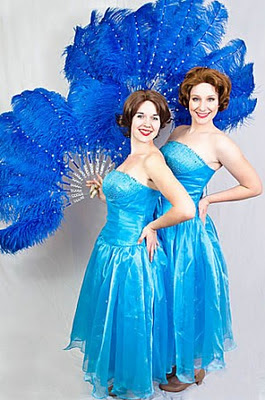 There is an old saying, “If it ain’t broke, don’t fix it.” Whoever decided to bring one of the most popular Christmas movies, “White Christmas,” to the stage did not follow that saying.

My criticism is of the musical itself, not of the Woodland Opera House production, which is excellent. The stage show does not allow for character development, and uses unbelievable situations. For example, it is “loathe at first sight” for Betty and Bob and it only takes overhearing a song lyric for Betty to turn around and fall madly in love with him.

The show also introduces songs not in the movie, which add little, don’t advance the plot and make a long show even longer; it clocks in at about three hours.

However, all that said, director Jeff Kean has done a beautiful job with what, according to audience reaction, was a very popular musical.

It is difficult to step into the shoes of such iconic performers as Bing Crosby, Rosemary Clooney, Danny Kaye and Vera Ellen, but Kean has found a quartet that do quite well. Scott Woodard, as Bob Wallace, is a crooner in the classic sense and has a smooth likability. Matt Kohrt, as Bob’s partner Phil Davis, is a talented hoofer with a pleasant demeanor who works well with Woodard.

Catherine Nickerson, as Betty Haynes, is new to the Opera House; she has a lush voice and can belt out a torch song with the best of them. Her sister Judy, as played by Kirsten Myers, is as cute as a button and is a good match in the dancing department for Kohrt.

As she did in the recent “Sound of Music,” Nancy Agee steals the show as Martha Watson, who helps run the inn in Vermont where the four performers find themselves. An old song-and-dance woman with a heart of gold, “Motormouth Martha” lights up the stage whenever she opens her mouth.

Steve Cairns gives a solid performance as Henry Waverly, the general “who stopped being a general” and is trying to make a go of it in this Vermont inn.

Devon Hayakawa plays little Susan Waverly, the general’s granddaughter. She is precocious and talented and does a great rendition of “Let Me Sing and I’m Happy.”

Chris Taloff, as Ezekiel, the slow-moving, slow-talking stage hand, turns what appears to be a genuine broken arm into something that makes his character even funnier.

Allison Ruanto and Kara Sheldon are the oversexed chorus girls, Rita and Rhoda, who spend most of their time giggling.

This is a lushly costumed show, with costumes designed by Denise Miles. The women’s fashions for the “Sisters” number are particularly beautiful, and Agee is a stand-out in her red lamé dress for the finale.

Sets, on the other hand, are just utilitarian. With so many scenes requiring different sets, set designer John Bowles had to sacrifice detail for ease of movement (and gets credit for fairly quick set changes).

Choreographer Staci Arriaga has given us some outstanding production numbers, much more complicated than one is used to seeing in a community theater. Woodland is fortunate, indeed, that its classes for young people include tap dancing, because the tap numbers, particularly the show-stopping “I Love a Piano” are simply outstanding.

Music director James C. Glica-Hernandez’s orchestra appears to be 12 strong, though only nine are mentioned in the program. The fuller orchestra gives a professional sound to the production.

With the Opera House all spruced up in Christmas finery, draped with greenery and lights and full of holiday cheer, this is a great way to treat the family to a Christmas classic. It hits high marks on so many points that it’s a real keeper.