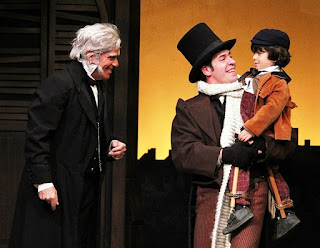 If you ever thought it would be fun to take your children or grandchildren to see Sacramento Theatre Company’s sumptuous production of “A Christmas Carol,” do it quickly. When this perennial favorite ends on Dec. 23, it will be going on hiatus for several years.

This sparkling new production, directed by Michael Laun, celebrates 25 years since the work was first commissioned for STC by Dennis Bigelow, who directed the first production. It has since been performed in several cities across the country.

With music by David deBerry and book adaptation by Richard Hellesen, this musical version of the Dickens classic includes a lot of Dickens’ original words, as the actors both narrate and perform seamlessly, while set pieces slide in, rotate and move out again. (Kudos to all the tech people who manage Scrooge’s bed so wonderfully!)

Greg Coffin modernized the music a few years ago, and has reorchestrated the soundtrack for this 25th anniversary production. (The orchestration is recorded; no live orchestra was used … but you’d never know it.)

In years past, I have complained about excessive stage fog and over-use of reverb on the microphones, and I was thrilled to find that neither of these is a problem and I found nothing whatever to grumble at.

The redoubtable Matt K. Miller, back from a tour performing in Greece, is making his fifth appearance as the ultimate Christmas grouch, Ebenezer Scrooge. I am an unabashed fan of Miller’s work and love how he balances the irascible temper of Scrooge with his rediscovered joy in being a child and a young man in love, and how his heart is awakened with feelings for both his nephew Fred (Scottie Woodard) and little Tiny Tim (played in this performance by Miller’s son, Max Miller, alternating in the role with Liam Nevin). Scrooge’s child-like glee at realizing he has not missed Christmas is particularly touching to watch.

Miller is surrounded by a host of first-rate actors, many of whom are products of STC’s Young Professional’s Conservatory.

Ninth-grader Courtney Shannon, in her third season with YPC, did a wonderful job as the Ghost of Christmas Past, steering Scrooge through many eras of his young life, where he sees himself as a child (Rion Romero, alternating with Cameron Stephens), an apprentice (Griffith Munn, alternating with Garrick Sigl), and a young man (Brian Watson, who definitely shows the beginnings of the cold, unfeeling Scrooge that he will become in later life). Shannon alternates in this role with Devon Hayakawa.

Could STC do this show without Michael R.J. Campbell as the ebullient Ghost of Christmas Present, whose good humor can take a sharp turn when addressing the problems of “ignorance” and “want” that Scrooge has chosen to ignore? Campbell also plays several other smaller roles, including the delightful Fezziwig, Scrooge’s first boss, kicking up his heels with his wife (Lindsay Grimes) and showing that you don’t have to spend great sums of money to make your employees feel good about their jobs.

The Cratchit family is well represented by Michael Jankinson as Bob, long-suffering clerk to Scrooge, who steadfastly maintains his good cheer despite poor working conditions, low wages, his large family and worry about Tiny Tim.

As Mrs. Cratchit, Miranda D. Lawson is a loving wife, who displays the ire against his unfeeling boss that Bob refuses to at this holiday season.

It is Tiny Tim who steals the show, however. At age 4, little Max Miller is as professional as any other actor on stage. He never stepped out of place, handled his braces and crutch expertly, knew all the words to all the songs, and recited his “God bless us, every one” in a clear voice that could be heard in the back of the house. Obviously, the apple has not fallen far from the tree.

Sacramento Theatre Company’s “A Christmas Carol” is a long-standing holiday favorite and this 25th anniversary production does it proud. It’s the Christmas show that everyone should see, at least once.
Posted by Bev Sykes at 1:21 PM