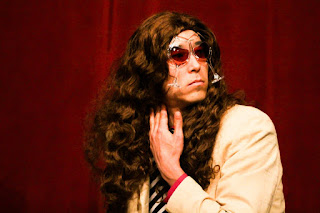 It’s a familiar tale. A child is born, supposedly the son of a god. His arrival flanked with revelers and worshipers brings forth a wave of religious fervor, song and adulation that threatens the city’s ruler and leads to chaos, blood and barbarism throughout the land. The god-man is persecuted; his followers ruthlessly suppressed. The story ends with the sacrifice of a son and the ultimate suffering of his mother.

Only this particular story, written by Euripides near the end of his life, happens centuries before the birth of Christ.

UC Davis Granada artist-in-residence Barry McGovern — known for his screen and stage roles in “Far and Away,” “Joe Versus the Volcano” and “Waiting for Godot” — directs Euripides’ classic “The Bacchae” at the UCD main stage, with original rock music, humor, dominatrixes and cheerleaders. A wickedly sexy Dionysus locks horns with King Pentheus in a violent power struggle between freedom and control.

McGovern’s vision of Euripides’ ancient Greek work, aided by Irish poet Derek Mahon’s translation, brings “The Bacchae” home to American audiences. His inspiration for Dionysus, the god of wine and revelry seeking vengeance on King Pentheus and the town of Thebes for denying his deity, was the larger-than-life rock stars of the 1970s and ‘80s. Dionysus commands every inch of the stage with his electric guitar and fierce sexuality à la Mick Jagger.

The play describes the battle between the Dynosian cult — enjoying the pleasures of the world, including wine, sexual love, music, dancing and the excitement of group emotion — and the Appollonian side of man’s nature — that which is rational and civilized, ordered and controlled, represented by Pentheus.

Bobby August Jr., as Dionysus, is a character you will long remember thanks to the outrageous and electric costumes of Dee Loree Silveira. August’s flamboyant personality matches the costumes and he puts his all into his role.

Mitchell Vanlandingham, as Pentheus, is an uptight little man, determined to tame the wild and unruly Dionysus. He gives a wonderful performance, until he is ripped to pieces by the Dionysian folks.

But if you’re looking for all this sexual love, wild dancing and bloody battles to play out on the stage, you may be disappointed, since most of the fun stuff takes place off stage and is then described in lengthy speeches by relevant characters on stage. This is not R-rated for sexual situations and violence, but rather PG-rated for suggestive language. (At one point I felt it was like watching an audiobook, but with cheerleaders.)

Maria Candalaria gives a very moving, tender and memorable performance as Agave, mother of Pentheus, who moves from exaltation to shock to grief and finally resignation, all in one continuous scene as she confronts the reality of her son’s murder.

Cooper Wise is wise, as Teiresias, the old, blind visionary who argues with Pentheus, and he is comfortable with giving lengthy speeches.

Original music for this production is by McGovern and Dan Cato Wilson, which is more tuneful than “throbbing,” and even reminiscent in part of Andrew Lloyd Webber’s “Joseph and the Amazing Technicolor Dreamcoat.”

Master of fine arts candidate Travis Kerr has created an impressive set, which is all the more impressive in its response to a Dionysus-caused earthquake.

Many in the opening-night audience were there as homework assignments for their classes, as witnessed by all those writing in notebooks furiously throughout the production. Perhaps the best review of all was given by two students sitting in front of me, who turned to each other at the end of the show, somewhat in surprise, and said, “Hey, that’s wasn’t as bad as I thought it was going to be!”

In fact, it was downright enjoyable.
Posted by Bev Sykes at 8:03 AM