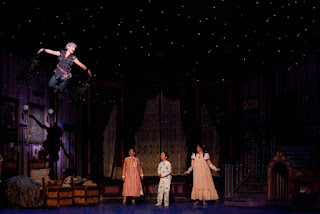 When Cathy Rigby and husband, producer Tom McCoy, brought their “Peter Pan” to the Community Center stage in 2004, it was billed as Rigby’s “farewell tour,” so it was somewhat of a surprise to see her returning in 2012 with another production of “Peter Pan.” But hey — if you can still do such an iconic role, why not?

In truth, the production, directed again by Glenn Casale, is spectacular, and Rigby is spectacular in it. Her flying through the air, across the stage and out over the audience, doing all sorts of twists and turns and flips high above the stage (choreographed by Paul Rubin) is perhaps not so unusual for an Olympic gold medalist, but have I mentioned that the actress is now 60 years old? (To compare, Mary Martin did her last “Peter Pan” at age 42)

But what I found even more impressive was her ability to step so effortlessly into the body and psyche of a young boy. She has the mannerisms, the constant motion, the endlessly curious hands which must pick up and examine everything, the swagger, the bravado, all the things parents of little boys will easily recognize (she herself is mother to four and grandmother to four). She literally inhabits the body of Peter Pan.

In fact, she seems almost younger than the three Darling children whom Peter takes with him to Neverland.

Krista Buccellato was almost more believable as the grown-up Wendy than the young girl Wendy (not surprising, as she has already earned her BFA), though she has a lovely voice and becomes “younger,” if possible as she attempts to mother the lost boys.

Oddly, Wendy’s two younger brothers are both played by girls, John by Lexy Baeza and Michael alternately by Sophie Sooter or Julia Massey. I saw 10-year-old Massey, who was fine, but not the cute little boy we are accustomed to seeing — certainly too old to be carrying a teddy bear. (Sooter is 8 and may be more size appropriate).

Kim Crosby is a nice, serene Mrs. Darling, fearful of leaving her children alone while she and her husband go to a party, because she thinks she has seen a boy at the window, and she is afraid he may harm her children.

The program lists Brent Barrett as Mr. Darling, though played by understudy Sam Zeller at the production I saw. The actor also plays Captain Hook and Zeller looked straight out of the Disney cartoon, visually perfect as the pirate trying to catch Peter Pan to make him pay for cutting off his hand, and tossing it to the crocodile, who has been chasing Hook ever since, trying to get the rest of him.

Nursemaid Nana (the dog) and the crocodile are both played by Clark Roberts who must have spent a long time studying both dogs and crocodiles to be able to bring both species to life so believably (thanks, of course, to costumes by Shigeru Yaji).

Choreographer Patti Colombo keeps the pace sprightly with a number of dance numbers, including a pirate tarantella and a pirate tango. It is interesting to note that the Indian dance, “Ugg-a-Wugg,” originally choreographed by Jerome Robbins, was felt to be insensitive to Native Americans and in need of revision. Colombo left the music unchanged, but completely redid the choreography to become a spirited dance sequence for the Lost Boys and the Indians, as they prepare to battle the pirates.

The lighting design of Michael Gilliam included the all-important Tinker Bell effect, a ball-shaped light that bounced around the stage and hid out in the children’s doll house. Such personality did the light have that as it began to fade and Peter makes a plea to the children in the theater to believe in fairies, the applause was strong, and Tinker Bell was saved once again.

At the end of the evening, as Peter Pan flies overhead sprinkling the audience with fairy dust, you will believe that thinking good thoughts will help you fly, and you will believe in fairies and in a little boy who still, 100 years after his creation, has steadfastly refused to grow up.
Posted by Bev Sykes at 6:24 PM