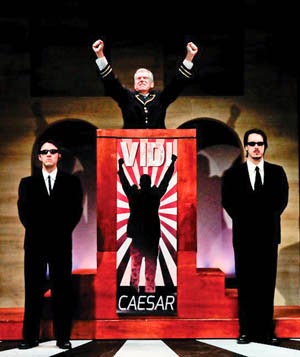 Plain and simple, the series of walls with graceful arches in a light brownish/salmon color is striking. On the walls behind the arches can be seen posters in various sizes, giving it the look of a pending political rally, which, in fact, it is.

When Matt K. Miller, as the title character, is wheeled in on a large pedestal, arms upraised, to greet the adoring crowd, the only quote that comes to mind is that he “doth stride the world like a Colossus,” which is, of course, exactly what is said about him.

While so many of the phrases in common usage come from the works of William Shakespeare, it seems that Julius Caesar is filled with more of them than most. It’s almost as if the entire play was written using colloquial expressions that we commonly use today. This is perhaps a result of the truncated script for this production, but still notable.

Directors Kirk Blackinton and Brian Harrower have set their production in modern times in a world filled with selfies and paparazzi. Everyone has a cell phone and even when the Soothsayer (Bert Andersson) warns Caesar about the Ides of March, he does it by showing him a warning on his cell phone. It’s amazing how this little device makes the Shakespearean dialog more accessible, recited as it might be on “Law and Order” or “CSI.”

There is also gender bending at play. While Brutus and Marc Antony (Jeb Burris and Ryan Snyder, respectively) are men, Cassius and Casca are both played by women, both making their STC debut.
Melisa Pereyra lends an aura of sensuality and seduction to the role of Cassius, displaying a deep hatred and a resolve that the ruler should die, while Melinda Parrett could have stepped off the set of “House of Cards,” in her portrayal of Casca as crisp, businesslike and as ruthless as Claire Underwood (whom she resembles).

While Miller owns the role of Julius Caesar and is as professional as he ever is, the role is a small one and the show really goes to Brutus (Jeb Burris) and Marc Antony (Ryan Snyder).

And while Caesar’s murder resembles more a street fight gone wrong than a neatly coordinated execution taking place in the large Senate chamber, enough blood was spilled that the stage required mopping during intermission.

Miller also deserves kudos for doing nothing, lying as a dead body on the stage after his assassination, and as a draped corpse on a pallet during his eulogy. It takes a lot of talent to play “dead” so convincingly.

Burris is excellent as Brutus, the man who is truly noble, but makes the wrong decisions over and over again. He is like a son to Caesar, whose pained “et tu, Brute?” is the wail of a man who, realizing that even those closest to him have turned against him, seems to give up his will to live. The decision to help murder his mentor is obviously a difficult one for Brutus.

The production, however, may really belong to Snyder, as the charismatic Marc Antony. His oration to the people of Rome — seeming to support the assassination, but all the while provoking the crowd to anger against the assassins — was masterful.

Costume designer McKayla Butym has chosen an eclectic assortment of costumes, resembling more Times Square than a Roman Forum, but fitting for the period in which the production was set.
This is perhaps “Julius Caesar” light, for those who fear heavy-duty, unexpurgated Shakespeare, but nonetheless enjoyable.
Posted by Bev Sykes at 2:41 PM