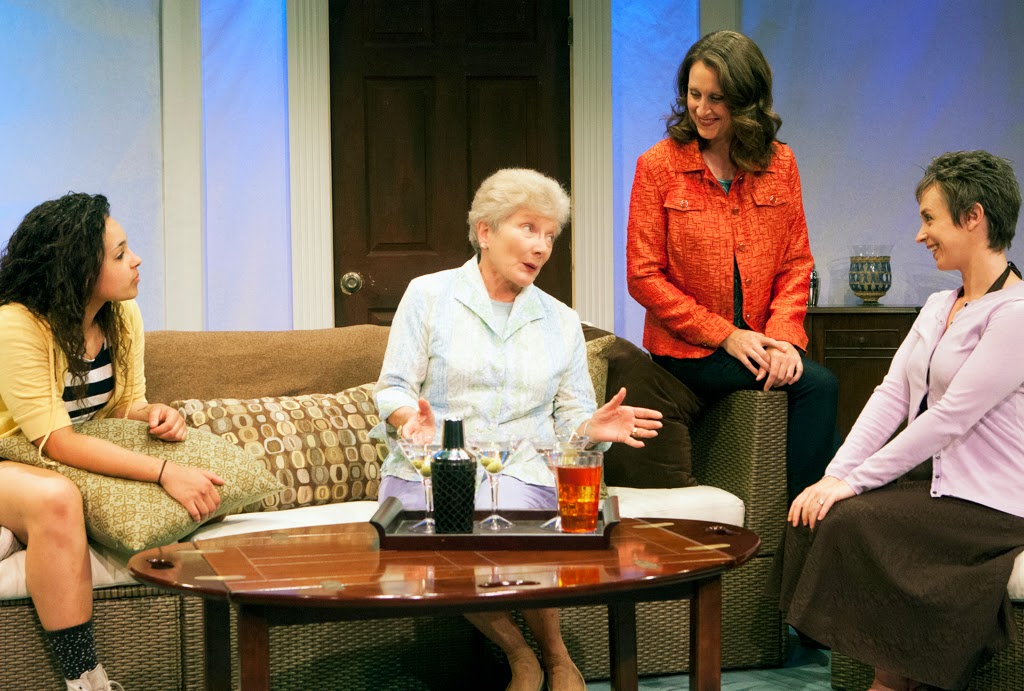 The message of Gina Gionfriddo’s hilarious “Rapture, Blister, Burn” — now given a wonderful treatment at Capital Stage, under the direction of Shannon Mahoney — is “be careful what you wish for.”

Her former college roommate Gwen (Kelley Ogden) has it all — a beautiful home, two children, a hunky husband any woman would want.

Husband Don (Sam Misner) is the dean of a small college, counselor to students with behavior problems. He is also Catherine’s former lover. When Catherine went off to London for a year, Gwen moved in and married him.

When Catherine’s mother Alice (Phoebe Moyer) has a heart attack, Catherine decides, based on family history, that her mother’s death is imminent and she rushes home to take care of her in her final days (though Alice seems fine).

Concern for her mother brings the three old college chums together again, as Don uses his contacts to get a teaching job for Catherine while she is waiting for Mom to die. As the play begins, there is an awkward reunion of the trio.

Apparently, Catherine and Gwen had a telephone conversation which, owing to having drunk too much, Catherine does not remember, which prompted her invitation to visit the couple and which explains Gwen’s nervous constant chatter.

When Gwen leaves the room, it is apparent that the old sparks have rekindled for Catherine and Don.
Rounding out the cast is Madilyn Cooper as Avery, the baby-sitter with a black eye whom Gwen insists on firing because “we can’t let our son thinking this is normal, like someone punching out his baby-sitter is no big deal.”

The plot device of having Catherine teach a special seminar in her home to only two people — Gwen and Avery (with Mom on hand to provide martinis) — is contrived, but an efficient way to get to the meat of the show, which is feminism as viewed by three generations of women.

As each of the three gets fuel for her own particular fire, unhappy Gwen, who wishes she had pursued a career, agrees to switch places with unhappy Catherine, who misses marriage and a family. Gwen will take her older son, with whom she has a better relationship, and take over Catherine’s apartment and her bank account. Catherine and Don will move in together with the younger son, who is the problem child.

As expected, there is some crabgrass in that greener grass on both sides of the fence as each woman discovers that her heart’s desire may have been in her own front yard after all.

There is first-rate acting in this comedy. Ogden is a wonder as Gwen, her insecurity and people-pleasing personality leading to nervous chatter, changing to a dark mood when she realizes that Catherine wants her husband. The personality change is night and day, and wonderful.

Smith’s Catherine is self-assured and confident until hormones and suppressed longing take over and then she leads with her hormones and loses herself in the passion of what Avery calls “the love drunk.”

Cooper’s Avery is the most level-headed one of them all, a young woman who rejects the feminism of Betty Friedan and her opposite, conservative Phyllis Schlafly, both of whom she finds outdated. Avery and the rest of her generation believe they have seen the mistakes made by the older generation and have learned from them.

Her observations are right on target, and she has a comment about Google maps that may be the funniest line of the night.

Phoebe Moyer is a jewel as Alice, Catherine’s mother, raising her child in the days before feminism became a “thing,” with some solid, down-home observations. She also is ready to make a martini at the drop of a hat.

If you suspend disbelief in some of the plot, and just enjoy the snappy dialog and the comedy, this is a very funny show, but one with a bit of substance to make one think.

And by the way, Sam Misner and Megan Pearl Smith comprise the popular Davis-based musical group, Misner & Smith, which is playing a concert at Capital Stage on Sunday, March 29.