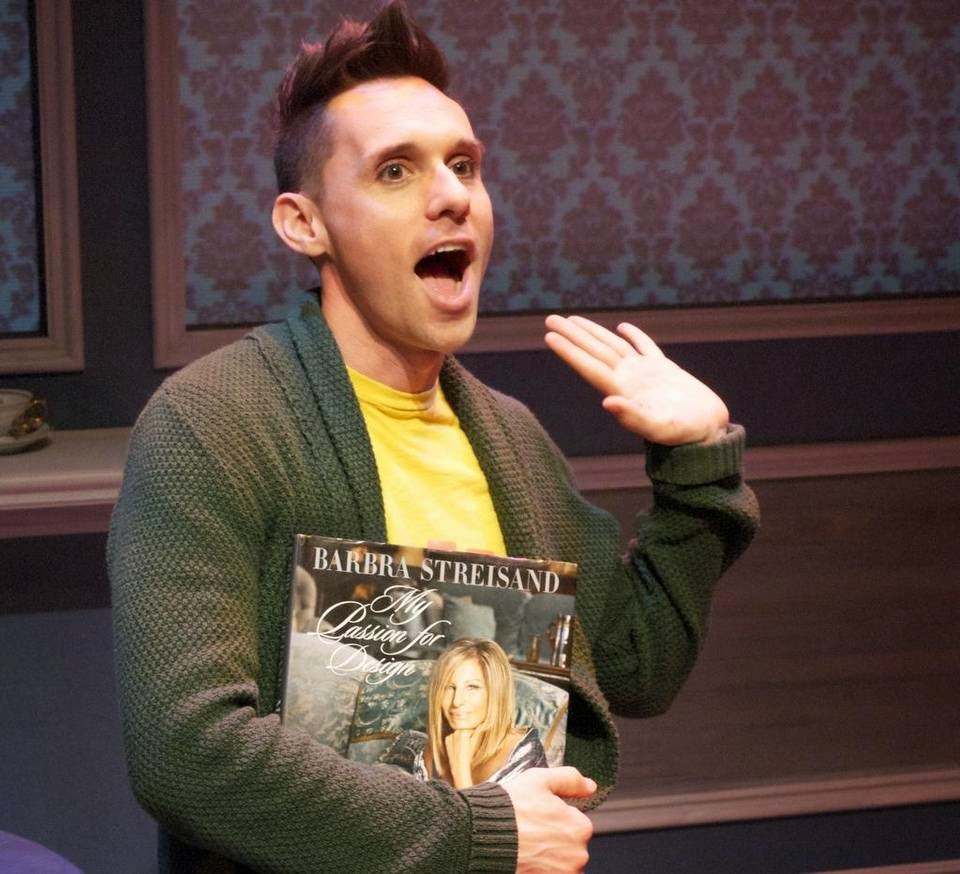 Playwright Jonathan Tollins wants everyone to know that his hilarious one-man play, “Buyer Cellar,” now at the B Street Theater, is a work of fiction.  In fact, actor Nick Cearly takes great pains to explain to the audience before the play starts that this whole story is Tollins’ fantasy based on the then-newly released Barbra Streisand book, “My Passion for Design,” in which she photographs the rooms in her mansion and takes the reader on a tour.  But Tollins has never been in Streisand’s house and he certainly would do nothing to upset  "someone as famous, talented and litigious as" Barbra Streisand.  “The whole thing is preposterous,” Cearly says.  “You know that, right?”

The one thing that is true, apparently is that the book shows a shopping mall in the basement of Streisand’s house, set up with different stores (including a toy shop, vintage clothing shop, and soda fountain) to display the many tsatskes collected over her lifetime.

Cearly also tells the audience that he doesn’t “do” Streisand and that there are lots of Streisand impressionists out there (“some of them women”) and that while Streisand will appear in the piece, it won’t be an attempt to mimic her, but rather to suggest her.

Explanations out of the way, let the fun begin. Over the next 90 minutes, I can’t remember laughing so hard in a long time.

Cearly plays Alex More, an out of work actor (he was recently fired from Disneyland for threatening an obstreperous child with a churro) who is offered a job by some mysterious person in an estate in Malibu.  He explains to the audience that he ultimately learns this is the home of Barbra Streisand and hastens to assure us that though he is an out and proud gay man, he is not a Barbra Queen or a Judy Queen, though his boyfriend Barry is and so he knows a bit about Streisand through Barry.

Alex’s job is to sit in the mall all day, keep the shops organized and await the only customer who will ever shop there.

She arrives on the third day and decides to shop in the toy store, where she is taken by a certain French doll and asks the price.  It’s all play acting, but Alex, the actor, is up to the challenge and there is a fun give and take with him and Streisand, who doesn’t want to pay full price (for this doll which she already owns).  The interplay sets up a relationship between the two which continues over the coming weeks, as Streisand shops for this and that and the conversation between the two becomes more intimate, two somewhat lonely people developing a fantasy friendship.

Growing bolder, Alex tells her she should play Mama Rose in Gypsy and swept away by his enthusiasm she hires him as her acting coach

Barry, who at first was omigawd thrilled that his boyfriend would be in the presence of Streisand, begins to grow jealous and, feeling her behavior is becoming very odd, warns Alex not to get too involved and that he is just her plaything du jour.

But Alex sees a real friendship developing with the megastar, especially when she invites him upstairs to tour the main house, where he makes a social blunder which brings an end to his employment and teaches him a lesson about real friendship.

The play is never not double-you-over funny, though has moments of poignancy, the whole thing handled beautifully by the talented Cearly, who smoothly handles several different personalities with body posture, facial expression, and slight voice changes.  He is at his best in handling both sides of conversations with Streisand.

This is a not to be missed production if you like funny, if you like Streisand, and if you like to see a talented actor at the top of his game.