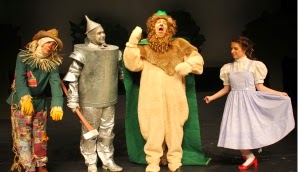 The Davis Musical Theater Company has opened a perfectly charming production of “The Wizard of Oz,” directed and choreographed by Jan Isaacson.

While this is a bare bones production, as far as tech is concerned, there is nothing bare bones in the delightful performances, the costumes or the choreography.  The production is a mostly faithful interpretation of the iconic movie.

Cass Olson is a lovely Dorothy, sweet and innocent and full of wonder, yet longing for her Kansas home.  She has a strong, clear voice that gives perfect pitch to “Over the Rainbow” and she has good rapport with all of her fellow actors.

Dannette Vassar is an Auntie Em to be reckoned with, while the Uncle Henry of Scott Daughterty was more subdued.  Both appear later in Oz, with Daughterty also playing the Captain of the Winkie guard.

Edward Arakelyan is just wonderful as the Scarecrow (and in Kansas, the farmhand Hunk).  He is winsome and engaging and it’s no wonder he and Dorothy become BFFs.

Gabe Avila maneuvers around in that big Tin Man suit and was also the farmhand Hickory.  He has a big heart in that empty chest of his.

And what can one say about Steve Isaacson as the Cowardly Lion (and farmhand Zeke).  He’s big and cuddly, with a powerful voice.  He is wonderfully reminiscent of Bert Lahr and is truly a Dandy-lion.

The delightful Brian McCann is Professor Marvel and, in Oz, the Wizard.  This role is just perfect for him and he is so much fun to watch on stage.

Lucinda Otto must have been channeling actress Billie Burke because she sounded just like her as Glinda.  She enters and leaves from the wings instead of in a magical bubble, but while there She’s perfect as the Good Witch of the North.

Sarah Kraemer, on the other hand is not good at all...which means she was very good portraying the Wicked Witch of the West (and nasty Kansas neighbor, Almira Gulch).  She had a marvelous time chewing the scenery and at times with that green makeup, her eyes seemed to glow as she spat out her hateful words at...well...everyone.

Fiona Cubbage and Veronica Kyker were great at the Mayor and Coroner of Munchkin land, while Ava Guisino, Lexi Telles and Gillian Cubbage were the cutest Lullabye League you’ve ever seen, particularly six year old Gillian, who stole the show whenever she was on stage.

The other Munchkins, flying monkeys, jitterbugs, snowmen, apple trees, Ozians, and Winkies were a mixture of adult actors and members of DMTC’s Young People’s Theater.  All were delightful.

Special note should be made of Ryan Everett, who played the lead snowman, as well as other roles throughout the show, and stood out from the rest for his dancing ability.

DMTC needs a video person.  The show could have been enhanced in several places by using projections for, for example, the tornado, the flying monkeys, and the Witch’s “Surrender Dorothy” written in the sky, but they did as well as could be expected within the constraints of a small budget.

The yellow brick road, for example, was played by Tessa Hickman, also an excellent dancer, who wore a yellow tux with a long brick-printed tail, who went ahead Dorothy to show her the way.  It was a little odd, but it worked.

The review would not be complete without mentioning the DMTC orchestra, which sounded better than usual, and the marvelous costumes of Jean Henderson, who must have had a wonderful time putting this show together.  It showed. I loved that all the Kansas costumes were in grey, black and white, saving the explosion of color for Oz.

Bring your kids, bring your grandkids, and bring yourself, if you loved the movie.  You’ll have a wonderful time at this production.
Posted by Bev Sykes at 4:25 PM