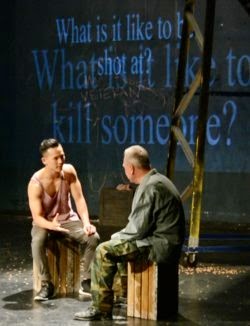 UCD’s master of fine arts in dramatic arts program brings together actors, choreographers, designers and directors to work collaboratively over two years in a range of traditional and experimental pieces.

The finale of the program is for each student to choose to create an individual exploration or to work with one or more of their cohorts investigating research questions surrounding theater, dance and performance.

This year’s performances examine war, sex, technology, cross-dressing and more, under the collaborative title of “Point of Departure.”

A two-night event is taking place on the campus right now. The two pieces of Program 1 are being presented on Saturday at 8 p.m. and Sunday at 2 p.m at the Arena Stage in Wright Hall. Program 2 can be seen on Friday, Saturday and Sunday at 8 p.m., starting with two pieces on the Wyatt Theater stage and then moving to the Della Davidson Studio for the final piece.

The “Echo Theater Suitcase Project: Yolo County” is the work of Daniel Bear Davis and his talented cast. The ensemble has been working together for the past six months in a process of continuous inquiry into our personal relations to war and the military.

A multi-generational group relate stories dealing with war experiences. The show is powerful and in some instances gut-wrenching as people relay either their own memories or experiences of others.
Audience members are given cookies and asked to think about their own sense memories, the sounds, smells and sights that evoke powerful past memories, while a veteran talks about his post-traumatic stress disorder triggers. It is a well-integrated piece that combines acting, dancing and video.

Performers are Cynthia Arellanes, Hien Huynh, Tiffany Martin and Ian Rowland, plus veterans Jim Corbett, a Vietnam vet, and Francis Resta, a veteran of World War II, who performs wearing his oxygen tank. Resta’s performance in particular was quite moving, especially when he dances the waltz with another performer.

At the conclusion of this piece, the theater is emptied and the audience asked to stand in the halls outside while the configuration is changed (and chairs blocked off).

The story unfolds in Internet-speak and involves making and breaking of relationships, the debate over “winkie faces” and “Bitmojis,” and an active video game. It ends with a very cleverly choreographed cell phone hand-off from person to person and back again that must be seen to be understood.

In the talk-back with Wolfe following the show, the audience members were very enthusiastic and excited that the piece so accurately depicted their lives. For those of us who grew up in the day of dial telephones, it was a little less relatable.

“iGeneration” is an ongoing project. This is the first in a series of theatrical investigations into smartphones and how they affect us. It will be interesting to see where Wolfe takes the investigation from here.

Evening two begins with my personal favorite of the whole program. “Indecency (& Other Bawdy Bits)” is a one-woman show by JanLee Marshall as Mary Frith (aka Moll Cutpurse), a notorious pickpocket, pimp, and fence in 16th-century London.

Dressed in her favorite costume, this cross-dressing woman addresses questions about: What is indecent? What is it to be a woman on the stage in the 16th century? — as well as our fascination with celebrity and indecency.

Marshall has an easy rapport with the audience and her piece involves both monologues and conversation with the audience. She is so at ease in her skin that when her work is interrupted by a knock at the back door by latecomers, she makes it part of the act without missing a beat.

By the end of her work, I wanted to rush home and do some investigation about Mary Frith, who seems to have been a fascinating woman.

From the bawdy 16th century to the lascivious present, Joyful Simpson’s “Tales of a Sexual Tomboy (a one-woman comedy)” is definitely not for the tiny tots, or anyone offended by blatant sexual conversation. While there is nothing visually offensive, there is certainly a lot implied and mimed.

Simpson is a very funny woman, not afraid to reveal (and exaggerate on) her sexual exploits from a very early age. She’s not afraid of telling her truth, whether joyful or painful.

“I have taken a fair amount of poetic license with my stories to maximize their theatricality,” she explains. Still, she mentioned that her parents will be coming this weekend and I wonder if she is going to edit herself a bit for that performance!

For the final work, Brandon Gonzalez’s “Vibrant Matter,” the audience left the Wyatt Theater and walked over to the new Della Davidson Studio. Gonzalez’s work examines how objects might use us or have an effect on us.

In a multi-media work that includes video, sculpture, design and choreography, a floral quilt interacts with a piece of foam, a video dances on air currents and human bodies transform into still-life images. The results were fascinating. This quilt actually came to life, the video on airwaves was mesmerizing and the final piece did amazing things with balance.

The talk-back following the Program 2 pieces was interesting, and helpful in answering those unanswered questions.
Posted by Bev Sykes at 8:48 AM