Gospel According to First Squad 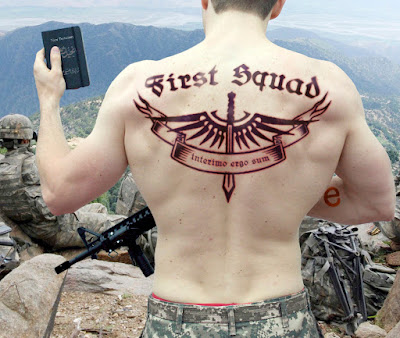 “Gospel According to First Squad” is the latest play in Tom Burmeser’s “War Cycle,” a cycle that began with “Wounded” (about soldiers who were wounded in the Iraq war) and “Survived” (dealing with a family’s grief at the death of their soldier son).

“Gospel” gets closer to the action, as Burmester and his ensemble realized they had not investigated actual battle and what happens to those soldiers, in this case, at an outpost in the “Valley of Death,” the Korengal Valley in Afghanistan.

A platoon of six soldiers and their Afghani interpreter await transfer back to the United States. The men are testosterone-infused, sex-starved and hungry to return home. They each have hair-trigger tempers and fights break out over many things. One particularly violent fight involves everyone, and the choreography by Chad Fisk makes it all look marvelously realistic.
But they also are a real band of brothers, and their concern for each other matches their anger at each other.

A new soldier, Gabriel, joins the platoon, filled with religious zeal, a determination to spread the word of God to the natives (which is strictly against rules), and eager to share his knowledge of God and the Bible with his fellow soldiers, none of whom have the slightest interest in listening to him.
If there is one problem with this production is that it is difficult to figure out who is who and which actor is playing which role (probably only important for a critic, not for the enjoyment of the audience). The men usually do not call each other by name, and they’re all dressed alike and have similar haircuts. Though their names are sewn to their shirts, they usually wear flak jackets that cover those names.

Rather than be wrong in identifying an actor, I will state that Jarrel Ramos is Lt. Dela Cruz, a photographer for a hearing that takes place at the start of the play. Caitlin Sales is Capt. McCasus, who is heading the investigation, Edward Gorman is Sgt. Taylor, David d’Olimpio is Capt. Raasch, Taylor Church is Pfc. Gehrman, Ryan Geberding is Pfc. Wright, Josh Hazeghazam is Pfc. Jackson and Monte Misa is Doc Brooks, the combat medic.

Borair Elyacy is the platoon interpreter, hoping to escape to America when the platoon leaves.
Act 1 of this two-act play takes place in camp where emotions run high and tempers clash. Wright receives bad news, which sends him into a tailspin that makes him fodder for the proselytizing of Gabriel.

There are a couple of spots in the action that border on preaching on topics about which we have heard preaching many times, but mostly the realism of the teasing, the flare-ups, the anger and the disappointments ring very true, and are an acknowledgment of the conversations Burmester and director Danika Sudik had with soldiers who had been in combat and shared their stories.

The dialog is not pretty, nor is it meant to be. Anyone offended by negative expressions or raw language will not be comfortable, but to pretty it up would be to do an injustice to the men this play honors.

In an interview, Burmester pointed out that “The guys are deployed in a very remote location. One of the things that stuck with me was that the farther away you are from the generals and the colonels, the more out in the field you are, there’s more of a sense of omnipotence. A gun gives you power. There’s more of a sense of not needing to adhere to rules, but being the ones that make the rules.”
Act 2 is a much shorter act, which takes place following an interaction with the enemy. It is brutal, bloody and shocking, but necessary to present the whole scope of the experience.

When Burmester set out to write his “War Cycle” his goal was to concentrate on the “overlooked,” the injured, the survivors and now the actual soldiers in combat. With “Gospel” he has given us very realistic glimpse of what it is like being out there in the trenches.z
Posted by Bev Sykes at 5:23 PM