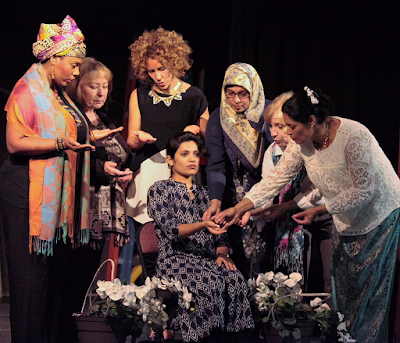 “SEVEN,” directed by Anita Ahuja, is an odd choice for a show for the Winters Theatre Company, which is more accustomed to presenting lightweight, frothy comedies. “SEVEN” is a documentary play, first performed in 2008, written by seven female playwrights based on interviews with seven women around the world who have fought for the rights and well-being of women and girls.

The play is being staged to commemorate National Domestic Violence Awareness Month.

Each of the women’s stories is moving and inspiring.

Hafsat Abiola’s story was written by Anna Deavere Smith and was performed by Carla Fleming. After the assassination of both her father (briefly president of Nigeria) and her mother, Abiola fought a campaign for human rights in Nigeria and founded the Kudirat initiative, promoting democracy in Nigeria. She was named Global Leader of Tomorrow at the World Economic Forum in 2000.

Fleming brings a quiet dignity to her character. She carries herself as would the daughter of a noble family, and rather than rant and rave, she gets results by being cool and collected, her very demeanor demanding respect.

Playwright Ruth Margraff wrote the story of Farida Azizi from Afghanistan, played by Monica Arneja. Azizi has met with George Bush and Hillary Clinton on women’s roles in helping to rebuild Afghanistan. She was part of several international groups working for women’s rights. When she was imprisoned in her own house by her husband, she managed to escape to the United States with her two sons, where she continues to work for women’s rights.

Like Fleming, Arneja delivers her message with a quiet dignity. She also points out that a burqa can be a handy piece of clothing when trying to hide children from authorities.

Guatemala’s Anabella de León raised herself and her family out poverty by getting an education. She was the first vice president of the Guatemalan congress and has been a congresswoman since 1995. She has received death threats because of her fight against corruption and for the rights of the poor, particularly women and indigenous peoples. Her story was penned by Gail Kriegel.

Ana Kormos is a real firebrand as Anabella, with her wild hair and a passion for her work and for her people.

Mu Sochua is a tireless activist in Cambodia, focusing primarily on domestic violence. She helped create and pass the Prevention of Domestic Violence bill.

Meera Ekkanath Klein gives an impassioned performance exploring the depth of her character’s feelings and desire to do something meaningful in her country.

Paula Cizmar tells the story of Marina Pisklakova-Parker, played by Fran Wittman. Pisklakov is Russia’s leading women’s rights activist and has set up a series of hotlines for victims of domestic abuse.

Wittman is a force to be reckoned with. She ardently portrayed Pisklakov’s passion for saving women from domestic abuse when she realizes how rampant a problem it is.

Mukhtar Mai was the survivor of gang rape in Pakistan. She found the courage to speak up, to bring charges against her rapists and to win a court battle and a large sum of money, which she used to establish a school for other girls. Susan Yankowitz tells her story.

Shahzana Ali gives an emotional performance that will have you weeping. Watching her transform from a shamed girl who felt her life was over to a powerful, proud woman is wonderful to behold.

Inez McCormack’s story is written by Carol K. Mack and performed by Janene Whitesell. McCormack, who died in 2013, was a Northern Irish trade-union leader and human-rights activist and founded an organization supporting disadvantaged groups based in Belfast.

Whitesell is a real spitfire and her performance shows all the fire that one would expect from an Irish woman.

“SEVEN” is a roller-coaster ride that will open the audience’s eyes to problems facing women worldwide and leave everyone with admiration for those who are making a difference despite the challenges they have faced.

The show runs in Winters through Oct. 9 and there will be a special performance at the Davis Musical Theatre Company on Saturday, Oct. 8, at 8 p.m.
Posted by Bev Sykes at 5:15 PM