The Impromptu at Versailles 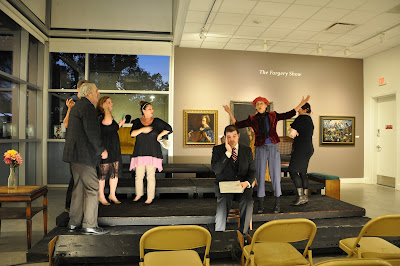 Before the performance began for Molière’s “The Impromptu at Versailles” at the Pence Gallery, Timothy Nutter, director of this Art Theater of Davis production, explained to the audience that in his youth he had performed with Acme Theatre Company on the Pence Gallery outdoor stage. And when the remodeling of the gallery made that space no longer usable for performances and Acme moved to the Davis Arts Center, it had been his dream to bring theater back to the Pence.

He has finally done that (and moved it indoors where it is warmer … and you can’t hear the passing trains!). It’s the perfect venue for this company.

While this 45-minute, one-act comedy is delightful, an immediate problem is that while the program lists the character names and actor names, the script (adapted by Nutter) gives little clue as to who is who. I spent a good deal of the time frantically trying to figure out which actor was playing which role.

For those still planning to see this play, let me make it easier for you:

It was obvious that Shane Osterhoudt was Molière and his wife (Mlle Molière) was played by Kate Bellock. I also was ahead of the game because I knew that the actress in the red beret was Scarlet O’Connor, playing Brecourt, because the gentleman sitting next to me was her next-door neighbor.
Molière finally called De La Grange by name and so I knew that he was played by Kevin Toole, which, by process of elimination meant that the tall character was Du Croisy, played by Adam Siegel. (The character La Thorilliere — played by Juan Miranda — entered late, so there was no question about who he was.)

That left three women unidentified until Mlle DeBrie was called to the stage by name and I could see that the slender actress who played her was Morgan Smith, the only woman not in black.

Eventually, I thought I heard Mlle Du Parc mentioned, and discovered that Jennifer McSpadden, the actress wearing pearls, played the role, which meant that Christina Schiesari must be Mlle Bejart, the character with the blue fan.

In the 17th century there was a battle between two competing theater companies in Paris, one led by Molière. Each company produced plays intended to glorify their own productions and actors while at the same time poking fun at the other company. (Think presidential debate!)

In Molière’s original, he satirized three of his most famous plays. In this adaptation by Nutter, the plays being satirized are those performed by the Art Theater of Davis itself.

“In our version, the actors quote and satirize plays ATD has produced in the past three years and satirize the acting style of ATD,” Nutter says. “As Molière satirically turned his play back on himself and his actors, we are turning this play back on ourselves and our acting at the Art Theater.”

The strength of ATD has always been the quality of its actors, and “The Impromptu” is no exception. From Osterhoudt’s mercurial temperament as Molière to the sexuality of Bellock as his wife, to the arguments led by McSpadden and Schiesari as Mlles Du Parc and Bejart, everyone gives impassioned performances, though occasionally the cross talk and disagreements among the whole cast make it difficult to understand specific dialog. But the comedy is often slapstick and very funny.

A plain stage surrounded by the paintings of the Pence Gallery’s “Forgery Show” — featuring revised, updated versions of masterworks like “The Girl with a Pearl Earring” and “The Goldfinch” — created the appropriate atmosphere for all the behind-the-scenes squabbling

The Oct. 29 performance at 2 p.m. will feature music by the Sacramento Baroque Soloists, including dance music by Lully, with whom Molière collaborated on entertainment for the king.
Posted by Bev Sykes at 3:18 PM