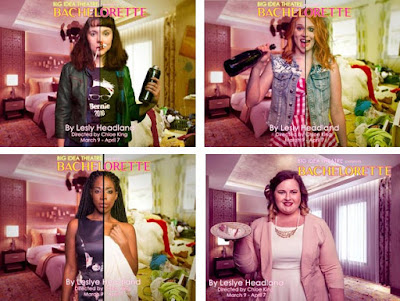 Is the new form of entertainment to be as crude and disgusting as you can be? Is that what passes for art these days? I cannot deny that I disliked Leslye Headland’s Bachelorette, now at Big Idea Theater.  I disliked it a lot, though it was peopled with six talented actors who portrayed their highly unlikable characters very well -- its only redeeming quality!

It is set in a New York hotel suite, decorated for a wedding, with stacks of gifts and an offstage bathtub filled with bottles of champagne. Into the room burst Gena (Leah Daugherty) and Katie (Taylor Fleer), both very high and laughing. Every sentence contains the F word. They discover the champagne and each take a bottle and begin to drink, as they trash the apartment. Regan (Taylor Vaughan) arrives. She is the maid of honor but hates the bride (Shelby Vockel) and has invited the other two because she knows the bride does not like them. The word "fat" is used many times as an insult which I, as a fat person, found distasteful. I hurt for the bride. (The word "retarded" is also used a lot, which many will find offensive.)

Two men, Jeff (Russell Dow) and Joe (Jacob Garcia) that the girls picked up at the bar arrive. Simulated sex and possible rape is added to the drugs, and alcohol. There is vomiting on stage.

Maybe this is the wave of the future, but I don’t want to be entertained by watching the worst of people, especially women.