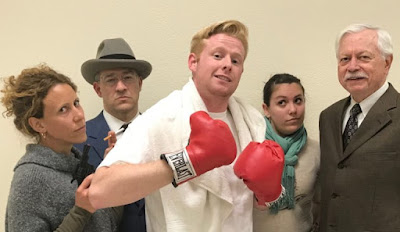 “Heaven Can Wait” was a movie produced in 1978, starring Warren Beatty and James Mason, based on the 1941 movie “Here Comes Mr. Jordan,” with Robert Montgomery and Claude Rains. Now the Winters Community Theatre Company has put it on stage, under the direction of Jesse Akers. It’s the kind of drama/comedy that Winters does so well.

As Mr. Jordan confers with Messenger 7013 (Michelle Novello), who accompanied Joe to Heaven, they discover he’s right. A terrible mistake has been made. In her compassion to spare him a painful death, she plucked him out of a plane seconds before it was to crash. Records, however, show that Joe, a boxer, had 60 more years left to him and that he was going to be the Heavyweight Champion of the World.

What to do? What to do? Since Joe’s manager had him cremated, they can’t return him to his body and so Mr. Jordan begins the search for the body of someone about to die that Joe can borrow.

Tufts is the perfect choice for Pendleton; a tall, lumbering, not terribly bright athlete fixated on keeping his body “in the pink” and wanting nothing more than what he was supposed to have. He has the perfect New Jersey accent and the street smarts of a Jersey athlete.

Tom Rost always gives a solid, low-key performance, often speaking softly. He embodied Jordan, though fortunately as the play progressed, his confidence and his projection improved. He brings a sensitivity to the role and truly wants to do right by Joe and rectify the mistake that has been made.
Novello, as the brand new Messenger 7013, is eager to help Joe, but unsure what to do. She’s very earnest and is a nice complement to Mr. Jordan.

After a lengthy search, they settle on a millionaire tycoon named Farnsworth who is about to be killed by his wife and her lover (his secretary). Joe is at first reluctant, but since it seems to be his last opportunity, he agrees to inhabit Farnsworth’s body, intent on getting it “in the pink” so the can continue his boxing career. Mr. Jordan promises it’s only temporary and that the search for the perfect body will continue.

Obviously Mrs. Farnsworth (Ana Kormos) and lover Tony Abbott (Loren Skinner) are confused by the very alive Mr. Farnsworth and his aberrant behavior. Kormos is quite good as the murderous wife, but sadly somewhat sabotaged by a voluminous skirt in Act 2 which looked like it had been dragged out of a laundry bag, it was so wrinkled. I hope someone irons it before the show progresses!

Joe/Farnsworth’s first act is to contact his manager, Max Corkle (Scott Graf). He must first convince him that yes, it really is Joe inside that unfamiliar body. Graf gives the outstanding performance of this production, as the grizzled Corkle. He is a delight whenever he is on stage and his final scene brings tears.

Lyra Domingues is Miss Bette Logan, the daughter of a man whom Farnsworth has framed and sent to jail. She comes to Farnsworth to plead for her father’s release. Joe/Farnsworth is taken with her sweet, sincere nature and falls in love with her, which makes his later opportunity to move to a perfect body somewhat problematic.

“Heaven Can Wait” is a fun play full of fantasy, twists and comedic situations. It can be slow in parts, especially when the cast seems to be stumbling over dialog (for which they cover quite well); in the end this is a charming play that will amuse anyone.
Posted by Bev Sykes at 12:27 PM