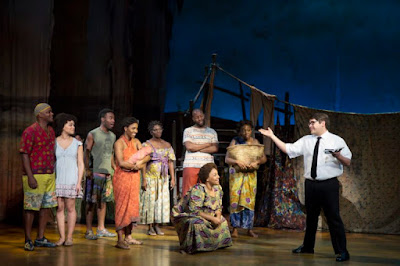 The very funny, very popular “The Book of Mormon” by those guys who also gave you “South Park” (Trey Parker, Robert Lopez and Matt Stone) has returned for another engagement for California Musical Theater’s Broadway series.

The ticket gives a parental advisory for “explicit language,” which may be putting it mildly. In fact some of the funniest things are things that you find yourself shocked to be laughing about.

Back in 2011 when word got out that someone was writing a musical comedy called “The Book of Mormon,” people in the Mormon church went berserk. There were angry protests about the denigration of their religion, pickets were going to be at the theater on opening night.

But then the producers invited some of the Mormon elite to see the show and they realized that it did not really make fun of their beliefs, though it did poke fun at things that arise out of those beliefs. In fact, as highly irreverent as this show is, in the end it is actually spiritually uplifting with the message that love is the answer.

The Mormon “imprimatur,” as it were, is the full-page ad in the program which shows just a photo of the Book of Mormon with a message that says “our version is sliiiightly different” and gives information about learning more about the religion.

The show starts with a bang with the crisp and catchy “Hello!” as each of the clean-cut graduating Mormon students practice their approach to door-to-door contacts. It is such an appealing tune that it may become an ear worm.

This is the day when the graduates will find out where they are to be sent on their mission, and who will be their partner for the next two years. These are young idealists, convinced they will change the world, and none more passionate than Elder Price (Kevin Clay), who may be the holiest, most dedicated (and definitely most vain) of them all. He has prayed to God that he will be sent on his mission to his favorite place in the world — Orlando.

It is a shock, then, when he is paired with Elder Cunningham (Connor Pierson), whom everyone considers a flake and nobody seems to like very much. The two of them will be setting off for the country of Uganda. Elder Price decides to make the best of things because he knows he was destined for greatness and knows that he can do great things in Africa.

Things do not go well from the start, when the missionaries’ luggage is stolen by the warlord known as “General” (because you cannot print his real name in a program or a review) and his henchmen. They also find a lackluster group of missionaries who have been there a while and have done essentially nothing because the natives don’t want to hear their message.

The natives are a happy bunch, if suffering from unspeakable conditions. Their happy tune, explaining how they can remain calm in the face of AIDS and other terrible conditions is “Hasa Diga Eebowai,” another translation that can’t be printed in a family newspaper, but also ear-worm worthy. They are resigned to their lives and want nothing to do with a new religion, which might anger the General (Corey Jones) and make their lives even worse.

Nabulungi (Kayla Pecchioni) is the virginal daughter of Mafala (Sterling Jarvis), who acts like a tour guide for the missionaries. Pecchioni is a force to be reckoned with.

The story and energetic music will set your toes tapping. The dance numbers (choreography by Casey Nicholaw) are amazing. Each number is a show-stopper, as are the more tender moments such as the haunting “Sal Tlay Ka Siti” sung by Nabulungi about “the most perfect place on earth.” Her “I Am Africa” is an anthem worthy of being featured on International Women’s Day!

If you have not yet seen “Book of Mormon,” this is an absolute must see. And if you have already seen it, you’ll enjoy it as much the second time around as you did at first.
Posted by Bev Sykes at 11:45 AM