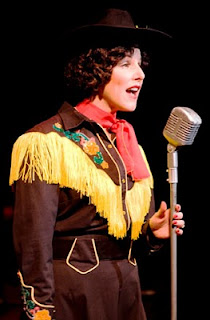 As we're reminded by Tessie Tura, one of the strippers in 'Gypsy,' 'You gotta have a gimmick.'

During the past few decades, in order to revive the music of beloved singers and songwriters, lots of gimmicks have been employed. 'Mamma Mia' wove a thin plot around the music of ABBA; 'All Shook Up' did the same thing, less effectively, with songs made popular by Elvis Presley.

Additional productions have been concocted to showcase the music of The Four Seasons ('Jersey Boys') and Billy Joel ('Movin' Out'), among others.

The show highlights 23 of the country singer's most popular hits, including 'I Fall to Pieces,' 'Your Cheatin' Heart,' 'Crazy' and 'Walkin' After Midnight.'

The gimmick that propels this show involves a devoted fan, Louise (Michele Hillen), who is smitten the first time she hears Cline (Dyan McBride) on Arthur Godfrey's TV show.

The show follows Louise's fanaticism, starting with phone-in requests to a local radio station, attending a live concert, actually meeting Cline and then becoming her friend. The subsequent correspondence between the two, following that first meeting, continues until Cline's untimely death in an airplane crash, when she was only 30 years old.

This gimmick gets us from song to song, and Hillen's performance as a big-haired Texas housewife - with a personality as big as Texas itself - is a real crowd-pleaser. The actress elicited many whoops and hollers from the audience.

But as a jaded reviewer, I found her too much. I didn't need to see or hear any more about Louise's tight outfit, or see her slap her backside - repeatedly - as she sashayed across the stage to the beat of the band's drummer.

Still, it's a way to get McBride's Patsy Cline from one costume change to the next. (I counted eight.)

As for McBride herself, she brings Cline back to life beautifully.

Whether bemoaning lost love or belting out another toe-tapper - the seats in our row were bouncing up and down, from all those tapping toes - it's easy to see how a woman like Louise would be smitten by that voice.

McBride's interpretation of 'If I Could See the World Through the Eyes of a Child' is particularly moving.

Were it not for a visit to Facebook, I wouldn't have guessed that half of Daniells' band members were substitutes on opening night. That aside, the cohesion was tight under Daniells' expert direction, and the musicians worked well together.

The opening cowgirl number, complete with loud colors and fringes galore, brought back memories of the costumes Cline designed herself, which her mother then would sew.

The news of Cline's death comes abruptly in this play, and the subsequent performance of 'True Love' - Cline now dressed in brilliant white, with silver accents - is a bit overly dramatic.

All things considered, though, McBride's performance certainly makes this a show to see.

(And don't forget to try one of the 'Patsy Cline' cupcakes during intermission; they're delicious!)
Posted by Bev Sykes at 11:51 AM