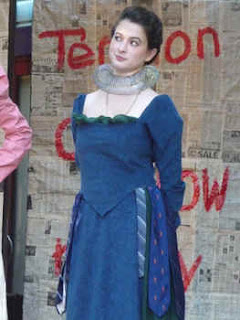 Competing with games at the Little League fields across the street, happy noise from the Bouncy House at the picnic area in Community Park, passing ambulances and other noise making vehicles, and the occasional cyclist tearing along the path in front of the Art Center Stage, Acme Theater Company celebrated its 30th season with its annual thank you to Davis, a free production of Shakespeare’s “As You Like It,” under the direction of Artistic Director Emily Henderson.

The group decided to celebrate its 30th anniversary by engaging the community in recycling, and turning the recycled materials into art. Creating sets and costumes almost entirely from recycled materials was a real challenge, but the young actors and technicians proved up to the task.

Hannah May is credited with scenic design and the unique choices worked beautifully. The proscenium arch of the stage was decorated with cardboard boxes while large rotating panels on the stage were covered with newspaper–one side for the next, with graffiti painted on it in angry red, the other side all in pages from the comic section. (At the time the design was made, who knew we’d be having rain storms in May?)

Hope Raymond is credited with costume design, and the costumes were ingenious. The play takes place in “Elizabethan era Davis.” The ruffled collar around one character, for example, was a Slinky; on another character it was the silver exhaust hose from a clothes dryer. Absolutely inspired. Two women wore dresses accented with men’s ties, one in an intricate woven pattern, the other as almost an overskirt. The pattern on one of the ties indicated there may have been some ignoring of “Star Trek’s” prime directive back in Elizabethan time...but it was my favorite part of the costume.

The audience was given a program designed to look like the town newspaper (“The Herald”). The program was designed by house manager Sarah Douglas and the front page headline story gives the background of the play under a headline which reads “Duke Banished! Duchess says ‘Go Hug a Tree.’” The tongue in cheek articles were both entertaining and informative.

Music and dance are traditionally a large part of Acme’s spring show and this one is no exception. The production opens with a dance number, choreographed by Hope Raymond, which “recycles” its way through famous love songs of the ages, beginning in the 20th century, rewinding to the Renaissance, and then working its way back again. Midway through the show Raymond, Matt Gibson, and Jeremy Reinhard each have solo ballads to sing and display wonderfully warm and strong voices. A duet between Gibson and Reinhard has a lively kazoo accompaniment!

Reinhard is Orlando in this production, the youngest son of the recently deceased Sir Roland DeBoys, head over heels in love with Rosalind (Delany Pelz), daughter of Duke Senior (Andrew Lampinen), whose throne has been usurped by his sister, the evil Duchess Fredericka (Kristine Hager). Senior is living in exile in the forest.

Rosalind is banished from Fredericka's court and travels to the forest in the company of her cousin Celia (Gigi Gilbert-Iglesrud). Rosalind assumes a countryman's dress and takes the name Ganymede; Celia passes as Aliena, Ganymede's sister and they meet with Orlando who has joined the banished duke and is papering the forest with love letters to Rosalind. Ganymede becomes his firend and encourages Orlando to pretend to make love to her as though she were his Rosalind.

Pelz gives another delightful performance as the spunky heroine who somehow manages to completely disguise her appearance simply by donning a pair of men’s pants. Reinhard is wonderful as the lovestruck lad mooning for his lost love and so blinded by his pain that he doesn’t realize she’s right there in front of him.

Gilbert-Iglesrud’s Celia is a wonderful sidekick to Rosalind. The two of them giggled together naturally as would any young girls chatting about their boyfriends.

Matt Gimpelevich is Touchstone, the court jester who accompanies the girls into the woods. He grows into his role as the play progresses and is a delightful comic talent. Audrey, the country wench who wins his heart (Leah Julian) is a good match for him.

“As You Like It” is a play about love: physical and intellectual love, sentimental and cynical love, love at first sight, love between friends, love between relatives, imagined love, and deep, lasting love. It is the roles we are often forced to play, either by circumstance or by societal pressure.

Take the kids, pack a picnic, and enjoy a fun afternoon in the park with Acme Theater Company.
Posted by Bev Sykes at 9:45 AM