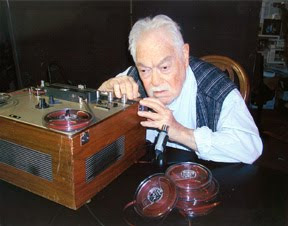 Eugene O'Neill's 'Hughie' and Samuel Beckett's 'Krapp's Last Tape' were presented together at the Goodman Theater in Chicago earlier this year, with Brian Dennehy starring in both. Both plays focus on a sixty-something man looking back over his life, and realizing he doesn't have a lot of years left (an uplifting evening for a 67-year-old critic!).

'Hughie' is set in a run-down New York hotel, where a new night clerk is meeting one of the regulars for the first time. Director Mark Heckman (also from Davis) plays the clerk, Charlie Hughes: nearly silent in his cut-away coat, not quite knowing what to make of the disheveled Erie Smith (Claudio).

Erie is a shabbily dressed hustler returning from a rough, multi-day bender, his shirt stained with wine. In a nearly nonstop monologue, he bemoans the loss of Hughie, the former night clerk, whose death precipitated Erie's recent adventures. We gradually realize that for all his bluff and bluster, Erie seems to have benefited from the admiration he received from Hughie ... although he feels that it was he, Erie, who brought excitement to the clerk's life.

The reality, though, is that Erie is lost without him. His luck seems to have disappeared with Hughie's death, and he desperately needs the new clerk to be the Hughie he has lost.

Hughes doesn't quite know how to act, as Erie strides about the stage soliloquizing, until a chance remark breaks through the stoicism and hints at a somewhat happy end for the play.

Claudio, a New York actor who moved to Sacramento more than 20 years ago, is the quintessential New York Everyman in this masterful performance.

Agrus, on the other hand, is a more quiet man. Indeed, the first eight to 10 minutes of 'Krapp's Last Tape' is silent: The spotlight gradually comes up on Krapp, who sits at a desk for a very long time. The audience may wonder if the old actor has forgotten his lines. He eventually sighs and laboriously gets up, eats a banana - bit of humor there - has a drink off stage (the first of several) and returns to slip on the banana peel left on the floor.

Krapp's dialogue, as opposed to Erie's steady stream, comes in fits, starts and half-thoughts, much like somebody speaking to himself. The role requires an expert physical actor, which Agrus is; he holds the audience's attention as much in his silent, unmoving moments as in his more active behavior. He demands our attention with his eyes ... and gets it.

Krapp rummages through his pockets, removing and replacing things, all with the difficulty of an old man with arthritic fingers that don't work as well as they used to. He brings an old ledger to the desk, on which sits an old reel-to-reel tape recorder. He checks the ledger and then hunts for a specific tape.

Each year, we discover, Krapp records a tape and talks about what he's doing at that point in his life (somewhat like an audio blogger, long before the notion of blogging was created). Krapp is about to turn 69, and he wants to hear the tape he recorded on his 39th birthday, where he speaks of bowel problems and of eating bananas.

The action here is a marked contrast to 'Hughie,' which concerns a man who, while not having achieved quite what he wants in life, still fights for that elusive 'thing' that will bring the spark back. Krapp, on the other hand, is an old man at the end of his life: He hasn't done much, seems depressed and is resigned to his ultimate demise, whenever that shall come.

The two plays are nice, contrasting character studies. With such experienced actors in the roles, it would be a shame to miss an opportunity to watch a bit of Sacramento theater history in the making.

During his curtain speech, Agrus credited '75 percent of my performance' to director Janis Stevens, who certainly has wrung memorable work from her star.