Some Things are Private 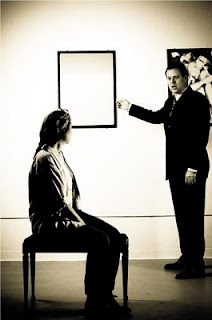 'I know pornography when I see it.'

We often hear these statements. But do we really know? Is it art? Is it pornography?

Could it possibly be both?

This subject is explored by 'Some Things are Private,' created by Deborah Salem Smith and Laura Kepley, and presented by the UC Davis department of theater and dance. The play, directed by Granada artist-in-residence Candice M. Andrews, continues through Sunday.

The work concerns the firestorm that raged over images by renowned photographer Sally Mann, whose book and exhibition, 'Immediate Family,' contained pictures taken on her 400-acre farm in the Blue Ridge mountains of Virginia, many of which include her three young children, often shown naked.

The photos depict very personal family moments and events, all taken well away from the prying eyes of the public. But when Mann put them on display, an intense controversy followed.

To give the play a greater air of authenticity, Andrews worked with scenic designer Gian Scarabino to create an on-stage art gallery. Patrons entering UCD's Main Theater are asked to wait until they can be 'guided into the gallery.' They're then led around the side of the theater and onto the stage, which has become a white-walled art gallery, displaying works by local photographer Jesse Velasquez.

Della Z. Duncan, playing Mann, talks about taking pictures of her children: capturing those special moments that are all too fleeting, and that all mothers see.

'Taking pictures is all about being reminded that in the loving of something, is the inevitability of loss,' she says. 'So the loving should be paramount.'

We then meet fictional character Thomas Kramer (played by Barry Hubbard), who first encounters Mann's work when his new wife decides to use her $20,000 bonus - with which Kramer had planned to pay off their mortgage - to purchase a $17,000 landscape photograph by Mann. Following his wife's death, now left to raise their young daughter alone, Kramer again encounters Mann's work at a museum exhibit.

As a father, he's both fascinated and repulsed by the photographs.

Much of the 90-minute one-act play involves discussions between Kramer and Mann, about the nature of the photographs.

'There is no veracity in photographs,' she insists. 'They merely show something that happened in 1/30th of a second.'

Geraghty is particularly sharp in each of his roles, most notably as the Governor of Virginia.

I had the most trouble with Grimshaw, who lacked projection and was very difficult to hear, so most of her dialogue was lost.

Andrews includes a very nice touch: a photographer, uncredited in the program, who seems to be everywhere, taking photos of people arguing for or against the exhibit. The irony of this paparazzo's total lack respect for anybody's privacy, in a stage work that discusses whether a mother's photos of her children are exploitative, is wonderful.

Wednesday's opening-night performance was followed by a discussion with the audience - and this will be repeated for Saturday evening's patrons - which seemed an extension of the play itself. Both audience and cast members took both sides of the play's core issue and debated whether the photos projected during the play are pornographic.

Hubbard, a master of fine arts candidate, has been inspired by Andrews' deep passion for the play.

'Through Candice's direction, I'm discovering the many layers of artistic and aesthetic reasoning behind Sally Mann's photographs,' he said. 'I'm learning that art can have real danger in it: symbolic and literal.'

The audience won't come to any conclusions about Mann's photographs, or the debate about art vs. pornography, by watching 'Some Things Are Private.'

But the play certainly raises questions that we should ponder from time to time.
Posted by Bev Sykes at 7:42 PM

Labels: "Some Things are Private", UCD