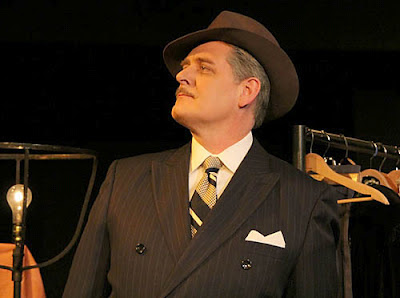 John Barrymore was born to perform. He was a member of a theatrical dynasty, which included his father, Maurice Barrymore, a dashing leading man, his mother, Georgiana Drew, an accomplished comedienne, and his uncle, John Drew, the “First Gentleman of the American Stage.” His siblings were Lionel and Ethel and he is, of course, the grandfather of young Drew Barrymore.

In his early career he was noted for light comedy, but after a few more substantial roles, which proved his ability to play tragedy as well as comedy, he made theater history in March 1920 when opened in Shakespeare’s “Richard III.” His was described as “the most inspired performance this generation has ever seen.” Critics hailed the production as “the beginning of a new era for Shakespeare on the American stage.”

Barrymore later went on to portray “one of the greatest Hamlets ever seen in New York.” Of that role, Laurence Olivier recalled that “Everything about him was exciting. He was athletic, he had charisma, and, to my young mind, he played the part to perfection.”

Financial problems, largely due to the demands of his many ex-wives, however, brought him to a more lucrative career in Hollywood and many roles in silent films, and then talking pictures. By the 1930s, his skills and memory were on the decline, due to the effects of hard living, hard drinking and possible early Alzheimer’s. Unable to remember his lines, he was forced to read from blackboards just out of camera range, and he began to be offered second-rate, rather than starring roles.

“Barrymore,” a play by William Luce, now at Sacramento Theatre Company’s Pollock Stage under the direction of Greg Alexander, is set close to the end of the actor’s life.

Barrymore has rented an old theater and he is there to run lines for “Richard III” in the hopes of appealing to backers so he can once again bring Richard III to Broadway.

The role of John Barrymore is the role of a lifetime and Gregory North tackles the challenge and comes up winner. He has the stature, the profile and the panache for the role. He is resplendent in either a double-breasted suit or a Richard III costume (nice job by costumer McKayla Butym).

The two acts of the play are quite different from each other. Act 1 is the jumble of an old theater, filled with set pieces, props and audience seats (people are invited to sit on the stage, if they desire). Scenic designer Mims Mattair’s carefully arranged clutter lends the perfect atmosphere.

The disarray mirrors the jumble of Barrymore himself, whose dialog is filled with a verbal avalanche of memories, off-color jokes, observations and brief scenes from plays in which he has appeared (and even a recitation of the poem “The Hound of Heaven,” which sounds quite Shakespearean, in context).

His prompter, the off-stage voice of Elly Award winner Sean Patrick Nill, tries to keep him at the task of running Richard III lines, mostly unsuccessfully. When Barrymore tries to stick with the script, his frustration at not remembering the lines leads him off in another direction time and time again, his distraction not at all helped by the amount of liquor he ingests throughout the act.

In Act 2, dressed as Richard the III, we get a better sense of the fear within the man as he struggles mightily to remember his lines. It is obvious he will never play this role again.

Playwright Luce plays loose with the dialog, occasionally using expressions that seem more contemporary than reflecting the era in which Barrymore lived. There is also a point in Act 2, following an attack of trembling hands, where the prompter asks the actor if he has thought of going to AA. But Barrymore died in 1942 and Alcoholics Anonymous was not founded until 1957. It was a glaring error.

Those points aside, this is a powerful show and will send you to Google to get further information on a man who was once one of the most respected members of the illustrious Barrymore family.
Posted by Bev Sykes at 8:56 PM