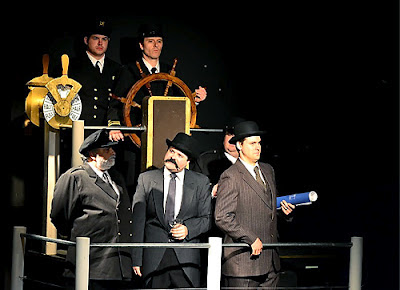 It was six years ago, on closing night of the Davis Musical Theatre Company’s production of “Titanic: the Musical” that director Steve Isaacson made the decision to repeat the show on the 100th anniversary of the sinking of the ship. He confided that he actually knocked off two weeks of rehearsal in order to make that happen.

Open a show of this magnitude with two weeks less rehearsal time? (And on Friday the 13th to boot!) It sounded like a recipe for a Titanic-sized disaster, especially recalling the good, if uneven, quality of the previous production. I crossed my fingers and hoped it would be good.

I needn’t have worried. This is a wonderful production, which went off, on opening night, without any of the glitches that befell the show last time.

There were plenty of things that could go wrong, but nothing did. The technical glitches from last time didn’t materialize, the things that hadn’t worked were eliminated. Everything else worked like clockwork (or if it didn’t, the audience wasn’t aware of problems).

With a cast of nearly 50, it’s inevitable that there will be performances that don’t live up to the really good ones, but with only two exceptions, everyone was, at best, outstanding, at “worst,” not quite on a level with the outstanding, but still good.

Among the outstanding performances was Dan Masden as Frederick Barrett, the stoker, who sends his proposal by telegraph home to his sweetheart. His “Barrett’s Song” was a highlight.

Likewise, Amber Jean Moore as Alice, a second-class passenger, wife of Edgar (Scott Griffith), is marvelous as a star-struck woman who longs to rub elbows with the likes of John Jacob Astor (Mark Deamer) or Benjamn Guggenheim (Rich Kulmann).

The always wonderful Marguerite Morris plays two roles, paired with Scott Minor both times, which is a little confusing. As a German couple, Morris and Minor are very moving in their duet “Still.”

A glance at the newspaper reproductions in the lobby will make it obvious that Joel Porter was a perfect choice to play Capt. E.J. Smith. Not only does he resemble him, but he sings the part very well.

Kyle Hadley brings the same life and enthusiasm to the character of Bandmaster Wallace Hartley as he did to Nicely Nicely Johnson in “Guys and Dolls.” His “Doing the Latest Rag” was lots of fun. Kudos to Jacob Montoya for the choreography.

Andy Hyun was wonderful as Charles Clark, headed off to America with his girlfriend (Rebecca Wilson), where they plan to be married.

Jenny Reuter was cute as one of the three Irish Kates headed to America to find jobs as ladies’ maids.
Adam Sartain as Bruce Ismay, the director of the White Star Line, spends the entire voyage angry that the ship isn’t going faster, convinced that there would never be a danger to the passengers. His barely controlled rage was at times a little over the top.

David Holmes is Thomas Andrews, the designer of the ship, so proud as his creation sails off into the North Atlantic, so frustrated when he stands on the tilting deck of the ship, wondering where it all went wrong.

All of the children give professional-quality performances.

It should be pointed out that this is not a plot show, but focuses on vignettes featuring one or two or three individuals at a time. We don’t get involved in anybody’s lives enough to worry about this or that person, but instead we care about all of the passengers.

I found myself quite emotional as the passengers boarded the ship, knowing what was to come. “Godspeed Titanic” is an incredibly moving number, as the ship begins to sail out to meet its fate.

I was also emotional at the closing tableau with half the cast saved and the other half about to die.

The sets, designed by Isaacson and Mark Deamer, are less elaborate than the 2006 production, but the missing elements were not missed and what is left is sufficient. The effect of the ship sinking is marvelous.
Jean Henderson’s costumes are always elegant, though I wish she had given Ismay a bit more believable mustache.

The program lists a 17-piece orchestra but the covered pit in which they play made it difficult for the audience to hear more than the piano, which is a shame.

While the ship Titanic may have sunk 100 years ago, DMTC’s “Titanic: The Musical” will sail effortlessly through the remaining days of its run.
Posted by Bev Sykes at 9:53 PM