The Meaning of It All 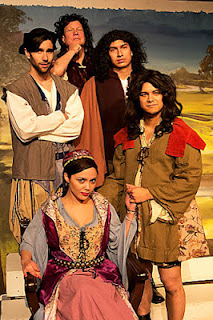 “The Meaning of It All” is a first play for 50-something Davis playwright Robert Lautz, who has been working on this play for five to six years. What opened on Friday night was version 11.4 (he says) of the idea he first pitched to California Stage director Ray Tatar many years ago.

This final version came about with help from dramaturg Rick Foster, and with Franco Renosto adding Italian translation of some of the script to make the actors sound authentically Italian.

California Stage’s small Wilkerson Theater was the perfect venue for this intimate comedy, and the beautiful set of Kurt Kurtis was so inviting that members of the audience were stepping onto it to have their pictures taken by friends in the audience before the show started. This, despite the presence of alchemist Calvino Mezzo Zucco (Brennan Villados) doing busy work to set the scene for the play that was about to begin.

“The Meaning of It All” takes place in Pisa in the early 1500s. The plot involves romance, comedy and alchemy. Calvino, an inventor and part-time alchemist, is about to be married to Alonza (Chelsea Barone). Alonza’s father believes Calvino has invented a process for turning lead into gold and the young chemist is scrambling to make it happen so his chances of marrying Alonza are not ruined. In the meantime, he accidentally discovers a universal solvent that dissolves anything, and he thinks this may solve all his problems.

At the same time, Calvino’s brother Savio (Tony Hutto) was fired from the University of Pisa and is moving into Calvino’s barn until he can figure out what he is going to do with his life.

When Savio’s friend Luca (Arturo Gonzales) shows up, depressed about the disappearance of his girlfriend Mona (Katie Dahl), Savio invites him, too, to join him in the barn.

Alberto Domenici (Mahlon Hall), the son of a wealthy merchant, has come to be a wedding guest, but he has heard about Calvino’s formula to turn lead into gold and is determined to have it for himself.

While this is not a rollicking comedy, it does have its chuckle moments. There are nice relationships among the couples and between Calvino and his brother. Alberto is the villain you love to hiss.

The play itself may have needed to go to version 12. There are things that work beautifully and things that don’t. Characters Luca and Mona seem to serve no real purpose, other than Mona being the cause of jealousy at one point. The actors are fine (especially Dahl), but their story doesn’t add much to the plot, except perhaps to muddy it a bit.

Villados does a wonderful job as Calvino, though he was sabotaged by a terrible wig that didn’t fit well, looked like it hadn’t been washed in months, and kept falling in his face so he was forced throughout the entire play to keep pushing it back almost constantly. (You’d think an alchemist who works with fire and dangerous chemicals would know better than to let his hair grow so long!)

Brother Savio fared better and was not forced to wear a wig at all, which allowed us to concentrate on his character rather than his hair, and actor Hutto gave an engaging performance.

Barone was a perfect spitfire of an Italian wife. The couple’s fight on their wedding night was one of the funnier scenes in the play. The double entendres and downright blatant sexual comments had the audience howling.

Hall’s Alberto Rossinio Domenici looks as if he had been born sneering. He is the aristocrat who is used to having his own way, and isn’t above a little breaking and entering, and a lot of threats and blackmail, to get it.

Aside from the wigs, Jenny Plummer’s costumes were lovely and reflected her years working with Renaissance fairs.

“The Meaning of It All” is a promising start. I hope it’s not another five years before we see more from Lautz.

Labels: California Stage, Meaning of it All