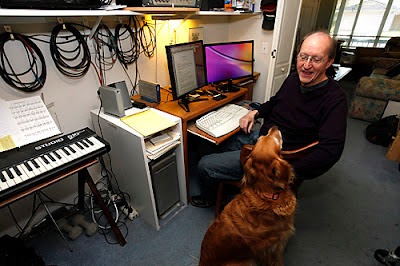 It will be a proud day when Robert Lautz’s play, “The Meaning of it All” makes its world premiere at California Stage’s Wilkerson Theater on Friday, April 27. Directed by Ray Tatar, this 20th presentation for California Stage is set in the Italian Renaissance and deals with love, intrigue and alchemy.

It is also a debut play for Lautz, who has spent the past six years polishing his skills as a playwright. What the audience will see is his 11th version of this story, which he has been thinking about for most of his life.
This now 50-something-year-old did not start out to be a playwright; he wanted to be a jazz musician. Lautz had played music all his life and went to the prestigious Berklee College of Music in Boston as a drummer, but found that didn’t really meet his needs.

“When you’re a drummer, they give you a pad and put you in a room and tell you to keep banging on it,” he said.

Looking for more interaction, after making friends with jazz vibraphonist Gary Burton (who went on to become vice president of Berklee, before his retirement), Lautz took up the vibraphone and became a composition major (“a natural for a percussionist,” he says).

After graduation, he “borrowed” the family car (his father never got it back) and drove across the country to return to his native California. He had grown up in the Bay Area and after his return, settled in Santa Cruz.
“I got there in April and the car still had snow tires on it,” he recalls.

He became a street musician, playing on the streets and in malls and gigs up and down the California coast, whenever he could find work, supporting himself for some 20 years.

It was after his wife, whom he met in Santa Cruz, became pregnant that he decided that “this jazz musician thing may not work out financially.”

In 1995, he ended up on the California Arts Council, a move that would bring him to Davis. By this time he had two daughters, ages 4 and 2, and real estate agents took him all over Sacramento looking for a house.
“Then I drove out to Davis, first getting lost on Olive Drive. But we fell in love with the town. It was a great place to raise our daughters,” he said.

Friends in Sacramento warned him that Davis was where the liberals were, “but we came from Santa Cruz!” he added, laughing.

“I’d always liked writing,” Lautz said, when asked about his play. Built while concentrating on his music, he’d never written anything officially. He had an idea floating around in his head about what would happen if someone invented a “universal solvent” that dissolves anything (kind of a variation on the King Midas touch).
He approached California Stage’s Ray Tatar with his idea.

“I was so naive,” he said. “He probably gets hundreds of play ideas pitched to him.”

Tatar, however, was intrigued enough to let Lautz know he would be willing to read his script once it was written, and if it was good enough, he would produce it.

Realizing that Lautz had no experience writing a play, Tatar suggested he connect with Rich Foster, the dramaturg for California Stage.
“He lives in Sonora and is a wonde
rful playwright and writer and volunteers his time to help aspiring writers,” Lautz explained. “Without him, I would not know how to write a play.”

Over the next five to six years, Lautz worked on his play, and Foster gave constructive criticism.

“I remember the first draft I sent him. He just tore it apart. He’s been wonderfully honest. After his criticism, I asked lots of questions. He said ‘bravo to your wonderful response to my savagery.’ ”

Lautz discovered that when one plot point doesn’t work, it sometimes requires making massive changes. His cast, for example, doubled in size, from three to six.

“Writing is a struggle. You lock yourself in a room and ask ‘why am I even attempting this?’ Rick would have ideas different from mine, but it made me realize he was right,” Lautz said.

“Sometimes you have dialog working so well but then you realize that in order to introduce a new idea you have to tear apart something and then mend it. I might be in love with a line that works well and realize I had to throw it out to get better perspective about what the story is all about.”

One of the ideas that had to go was the play’s setting. Lautz explained that originally he had scenes all over the place, including one on top of the leaning tower of Pisa, until he realized that, economically, he needed to find a way to set the whole thing in one room.

There will be incidental music throughout the play, from the time before the play starts to exit music. Lautz did a lot of research on music of the period which, he explained, tends to be mostly sacred vocal music music.

“I wanted small instrumental ensembles and I’ve found some really wonderful, charming and even goofy music,” he said.

Lautz also sought help from Franco Renosto, a retired UC Davis faclty member who is perhaps better known as a youth soccer coach, for translating some of the script into Italian, to give the play an authentic sound.

“When the characters get angry, they are more likely to speak rapidly in Italian,” he said.

After a long labor process, “The Meaning of It All” is about to be born, and there will be no prouder first-time papa than Lautz. The show opens April 27 and runs weekends through May 27. On Sunday, April 29, the playwright and his translator will hold a talk-back with the audience.
Posted by Bev Sykes at 4:04 PM