Al and Homer: The Drone Play 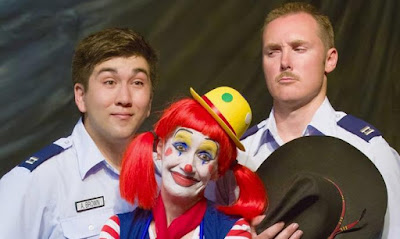 Jerry Fishman, whose play “Al and Homer, The Drone Play,” opened at California Stage last week, is basically a librarian and a poet. But his growing anger and frustration with America’s drone program caused him to direct that anger into writing a play that explores the effect of drone warfare on the drone pilots and their families, and the lack of interest or outrage by most of the country.

It has taken 10 years to bring his passion to the stage, sponsored by Ovation Stage and directed by Penny Kline.

There are several good things about this play. First and foremost is the incomparable Janet Motenko as the clown who becomes the heart of the piece. She is mostly silent (unless she is singing or playing the kazoo), and she is in just about every scene. Her costume, make-up and catalogue of marvelous facial expressions make her the one to watch.

It was also a brilliant idea to add “Fred and Ginger” (Elias Martinez and Rayana Wedge) who, choreographed by Sunny Smith, dance to familiar tunes of the 1940s and ’50s to fill in the time between dramatic scenes. Moving scenery on or off stage is frequently choreographed into their dance.

“The Drone Play” is the story of two drone pilots, Al (Terry Randolph) and Homer (Brent Dirksen), sitting in a bunker in the Las Vegas desert, looking at a TV monitor all day as they zero in on their targets halfway around the world. Over the course of the play you see how the pressure of the job and their completely opposite personalities gradually take things to the limit.

This is the first problem with the play; at least I hope it’s just the play, and not reality. A man like Al, with as much revulsion at the notion of collateral damage, should really be in another job. But by the same token a volatile, hate-filled person like Homer, who revels in “killing all the ragheads,” also should not be in control of a program that could wipe out innocent men, women and children.

Homer is married to Amanda (Lynnette Blaney) and Al is dating Nicole (Aviv Hannan) and we watch what both the actual jobs and the animosity between the two men do to their loved ones.

David Kamminga plays Yamir Ribbons, a newscaster for Al Jazeera TV who reads several breaking news announcements about tensions between Pakistan and India. It is a shame that even holding what was supposed to be a bulletin in his hands, he still stumbled over his lines every time.

The main problem with the play, however, is that the dramatic scenes seem to get progressively shorter, and toward the end it almost seemed as if the dramatic scenes were the filler for the dance sequences. The stilted dialogue often gave the characters a somewhat wooden feel, despite their otherwise fine performances.

The ending also was predictable shortly into the second act, so the big shocker at the end wasn’t.
Fishman has taken an important subject and created an important play that could be better, but that nonetheless should be seen by a larger audience, especially those who have no idea about our drone program and need to be shaken out of their apathy.

This gets an R rating for very rough adult language.
Posted by Bev Sykes at 8:30 AM