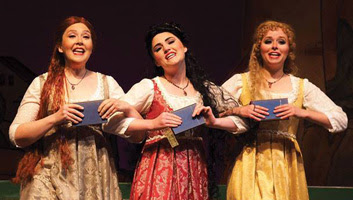 Gilbert and Sullivan wrote The Mikado in 1885.  It was, as are all of their 13 operettas, a satire on the British, but to make it different they decided to set it in Japan.  During the rehearsal period, there was a Japanese exhibition in London and they invited people from Japan to help the cast learn the mannerisms of the Japanese, so they would look as authentic as possible.

The show was a big hit and in no time was being performed all over the world, including Japan (in 1888 there were at least 150 companies, world wide, producing it)

For more than 100 years, it has been one of the favorites of the Gilbert & Sullivan operettas, but in this politically correct environment, there began to be some unrest among the Asian community that Caucasians would play “yellowface.”

In 2014, a Seattle production was attacked by a local newspaper, a scheduled production in New York was canceled due to threats, and companies across the United States were having to examine doing the show or face pickets, scathing newspaper publicity and other disruptive consequences.

San Francisco’s Lamplighters, who have performed The Mikado 21 times in its 64 year history, was confronted by two Asian-American theater groups who threatened to picket every performance, which resulted in the possible loss of the Yerba Buena Center, their San Francisco home, which did not want to be picketed every weekend.

They first extended an invitation to the Asian theater community to audition for the show, but few showed up (and the cast can be as large as 40 people).  Then they came up with what they hoped was a workable solution.  They decided to re-set the location of the work to Renaissance Italy (specifically Milan, which sounds enough like “Japan”), a period with opulent costuming opportunities, which would make for a beautiful tableaux.

The company rewrote the sections of the original which referred to Japan (it turns out it was less than 2% of the original script), and changed character names to make them sound Italian rather than Japanese.  The Mikado became Il Ducato.  Koko, the executioner, is now the Italianized Coco, and YumYum, his love, is now Aniam.  And so on.

Outrage from ticket buyers was instant.  The faithful weren’t going to have their Mikado messed with.  I admit to being one of the faithful upset at having my Mikado changed.  But I am – or at least was -- an official Lamplighters historian and I felt I should see it just to find out how bad it was.  I went in with an open mind and came out impressed that thy had left the integrity of Gilbert and Sullivan pretty much intact and without the backdrop of Japan it became blatantly obvious how very little “Japan” there actually is in the original, so that the political barbs and quips about British society stood out much more clearly.

It helps to have a first rate cast. Charles Martin makes an imposing, even coquettish Mikado with enough blood thirstiness in his bones to make him terrifying.

His son NankiPoo (now called Niccolu), is played by Mason Gates, who has a magnificent voice, perhaps one of the strongest I have heard in a lifetime of Mikados.  His was the only Italian name that I did not like, actually.

His love Amiam (YumYum) was the delicious Patricia Westley, flanked by her two friends Pizzi (Michele Schroeder) and Pippa (Autumn Allee).  Schroeder was a particular delight to watch.  She had a sparkle that lit up the stage whenever she was on it.

The imposing William H. Neil was Pooba, Lord High Everything else.  Neil has played the role of PoohBah for, it seems, centuries and has perfected it.  He really was born sneering.

William Neely was Piccia Tuccia, a noble lord.  This is a thankless character, because he has little to do after the opening number, still Neely strides around the stage nobly and fills in on ensemble numbers beautifully.

Sonia Gariaeff was Catiscia (Katisha), the matronly gorgon who has set her cap for Niccolu and would rather see him executed than in love with another.  Gariaeff is a marvel.  Her voice filled the rafters of the Lesher Center and yet she was able to display her softer side in contemplating the suicide of a love-lorn little bird. 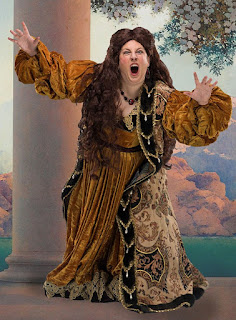 And then there was Coco, the Lord High Executioner of Tirmisu.  Of all Gilbert & Sullivan characters, this one is my favorite and I have seen good ones, bad ones, and so-so ones.  To my delight, F. Lawrence Ewing is one of the better ones. Over the past 25 years, Lawrence has made patter roles his own and his Coco is simply wonderful.  His wooing of Catiscia is one of the best scenes in the show,  His “shrink not from me, Catiscia” as she growls and lunges at him brings gales of laughter. 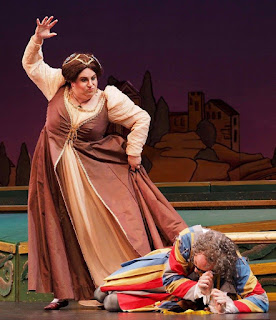 His list song, part of which is rewritten to be currently topical–a practice which predates this “new’ Mikado--written mostly by the marvelous Barbara Heroux is not to be missed.

Yes, the Japanese influence has been replaced by the broader Renaissance swirls, the more open gestures.  Student fans have been replaced by school books and everywhere there are little differences, but the important thing is that the integrity of the original Gilbert & Sullivan remains, and if the G&S Faithful can look at this show in that way, they will find a thoroughly enjoyable “new” show with most of the things they loved so much about the original.

I loved this review, Bev!

It's nice when someone who says they went in with an open mind really did.

Lamps had approached the Asian performing community (as well as others), previous to looking for Asian performers, to solicit input regarding ways to approach Mikado that would be more culturally sensitive. As far as I know, no response until we started looking for performers.