Nice Work if you can Get it 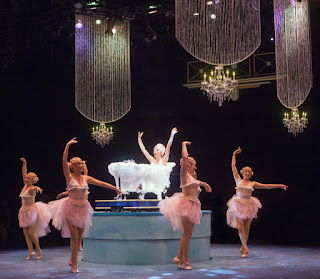 What better way to spend a nice summer evening than at Music Circus enjoying a fun, frothy musical like “Nice Work If You Can Get It”? This 2012 Tony Award-winning musical, directed by Charles Repole, is making its Music Circus debut this week and is an instant hit.
But then how can you go wrong with music and lyrics by George and Ira Gershwin, and book by Joe DiPietro?

It’s an old-fashioned Jazz Age musical, short on plot and long on song and dance. There are lots of chorus girls in sparkles, bootleggers and cops (usually the same actors) slinking around, trying to either avoid arrest — or make an arrest. There are young lovers, mismatched pairs and a finale that wraps things up nicely, all to the familiar Gershwin tunes like “‘S Wonderful,” “Fascinating Rhythm,” “I’ve Got a Crush on You,” and the title song.

When the show opened in New York, the lead, the multi-married ne’er-do-well Jimmy Winter was played by Matthew Broderick, whom Matt Loehr in this production very much resembles. He has the same innocence about him, even while drunkenly womanizing with the chorines. He’s the guy any woman would fall for. Loehr’s dancing skills are first-rate, especially in his tap numbers (I do like a good tap number, and there are many of them to like in this show).

Jimmy, in attempt to win the approval of his wealthy mother, is finally going to marry someone of quality, after three failed marriages to chorus girls. But Eileen Evergreen (Paige Faure) is “the finest interpreter of modern dance in the world,” as she frequently points out. Faure is very funny and her exaggerated body movements and wonderful solo (“Delishious”) show her off well.

But Jimmy doesn’t really love Eileen, and, in fact, doesn’t really even know what love is until he meets Billie Bendix (Kristie Kerwin), a bootlegger who has no interest in Jimmy — until she winds up in his arms. Like Loehr, Kerwin is ultimately likable. There’s just something “magic” about her.
Her two partners in selling bootleg whiskey are Cookie McGee (Michael Kostroff) and Duke Mahoney (Mark Bradley Miller), each of whom is wonderful in his own way. The threesome, needing somewhere to stash a lot of unsold booze, break into Jimmy’s beach house, which he assures her he almost never visits.

When Jimmy shows up with his soon-to-be wife for a honeymoon, Cookie unwillingly becomes the butler, while Duke becomes a handyman. Kostroff was definitely an audience favorite, and may have received the biggest applause of the night. He’s the classic musical comedy “hood” and plays it to the hilt.

Others in the cast include Music Circus favorite Ron Wisniski (last seen as Herr Schultz in “Cabaret” earlier this month) as Eileen’s politician father. Rich Hebert is Chief Berry, on the trail of Billie and determined to arrest her. Holly Ann Butler plays Jeanie Muldoon, a somewhat dim-witted chorus girl in love with Duke, because she is convinced that he is British royalty and her one ambition is to be queen of England.

Jamie Jones, a favorite of B Street audiences, makes her Music Circus debut as Millicent Winter, Jimmy’s mother, a role she was born to play. It is Millicent who straightens out all the crazy knots the others have tied by revealing a couple of surprises herself. Her role is small, but pivotal, and of course Jones nails it.

Though this musical was written in 2012, some of the lines are perfect for today’s political climate and brought the longest laughs of the night.

There is nothing to fault in this show. It aspires to no great message, it just wants to sing and dance and entertain the audience, and in that it succeeds perfectly.

Music Circus warns that the last show in this season’s series, “The Hunchback of Notre Dame” is much darker than the Disney film and is probably not suitable for younger children.
Posted by Bev Sykes at 11:22 PM

Labels: Music Circus, Nice Work If You Can Get It