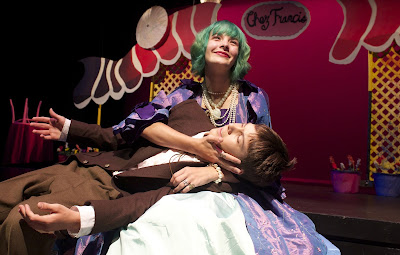 From the moment you enter the Brunelle Performance Hall for Acme Theatre Company’s production of “The Madwoman of Chaillot,” you feel as if you are in Paris. The set design by Benton Harshaw is full of bright colors, with the tables and chairs of the outdoor café painted in multi colors, accented by beautiful awnings and bright lighting (by Ari Wilk and Andre De Loera-Brust).

Immediately you begin to be introduced to the colorful, quirky villagers, The flower girl (Sylvie), who pushes her wheelbarrow across the stage; the street juggler (Garnet Phinney); the accordion-playing street singer (Maya Tripathi); the shoelace peddler (Patrick Foraker); an American in pastel plaid seersucker (Ryan Wiegt); and those wonderful whimsical bikes by Peter Wm. Wagner being pedaled back and forth across the stage.

This 1940 comedy by Jean Giraudoux was written during the Nazi occupation of France and is, in the words of director Emily Henderson, “part light-hearted fluff, party heavy-handed fable, part dense philosophy, part political protest, and part Dr. Seuss.”

It also, like some other revived stage shows, seems to have relevance to life today.

Early in the show, we are introduced to the bad guys, “The Machine” — Ari Wilk as the President, Chaitrika Budamagunta as the Baron, Mikaela Manzanzo as the Broker, and Michelle Monheir as the Prospector.

(It should be noted that this show is short on male actors, but the women playing men’s roles do an excellent job.)

They have discovered that there is oil under the streets of Paris and they plan to drill in the center of the city and make themselves rich.

A young man, Pierre (Giancarlo Gilbet-Igesrud), is sent to plant a bomb to start the plot working, but he has an attack of morals and throws the bomb, and himself into the river. The first thing he sees when revived is the waitress Irma (McKella van Boxtel) and it is love at first sight, though they are both too shy to do anything about it.

Aurelia, the eccentric heroine of the piece, who lives in the Chaillot district of Paris, learns of the nefarious plot and sets out to foil the plan and, with the assistance of her friends, real and imaginary, save the city.

Julia Smart-Truco, is a stand-out in her colorful costume and green hair (costume designers Eleanor Richter and Cassaundra Wages). It’s difficult to know if she’s fey or smarter than everyone … or a bit of both.

She enlists the help of her fellow “madwomen” — Constance (Cassidy Smith), Gabrielle (Garnet Phinney) and Josephine (Eleanor Richter) — to hatch a plot. It involves luring The Machine into her basement on the promise that the water is rich with petroleum. (Sarah Zaragoza-Smith gives another outstanding performance in the small role of Sewer Man.)

All of the villagers meet at Aurora’s home and conduct a mock trial, convicting the group without their presence. The Ragpicker (Chris Monheit) gives testimony in the person of the collective rich guys, with a wonderful long monologue in which he brags that “money adores me. It simply won’t leave me alone.” And then to prove he’s really a good guy, interested in the welfare of the poor, “It is a matter of fact faithfully reported in all of the newspapers I own that I spend all of my waking hours trying to get rid of my money.”

Despite the eloquence of his defense, the men are convicted and while the group leaves, Aurelia sets out to put her plot into motion.

When she has succeeded, she sums it all nicely by saying, “Nothing is ever so wrong in this world that a sensible woman can’t set it right in the course of an afternoon.”

Perhaps that will be prophetic.
Posted by Bev Sykes at 11:26 PM